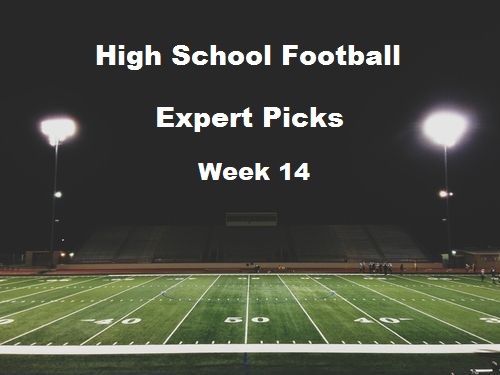 Week 14 is loaded with playoff games all around the country highlighted by a couple of California Southern Section games between ranked opponents. The game of the week will be St. John Bosco vs Centennial. These two seem to meet each other late in the playoffs ever year lately. The key to this game will be Tanner McKee. he was knocked out of last week’s game with a concussion. He is likely to play but if he is anything less than great the Braves and DJ Uiagalelei will have the upper hand. The other 3 experts are rolling with Centennial but we are taking the Braves. The other southern section game has Mission Viejo vs Mater Dei. The Monarchs can do wonders for their national title hopes with a convincing win.

There was a lot of agreement this week between the other experts. They agreed on 9 out of 10 games. The most surprising of those to us was them all picking Colquitt County. The Packers are playing Archer who most polls have as the top ranked team left in the state of Georgia. We disagreed with them on that and 3 other those games. As you know our consensus picks have been 50% this year so that puts Mater Dei, American Heritage, Miami Northwestern, Colerain and Fort Dorchester on upset alert. At this point in the season there are few huge shocks but any of those losing could effect national rankings.