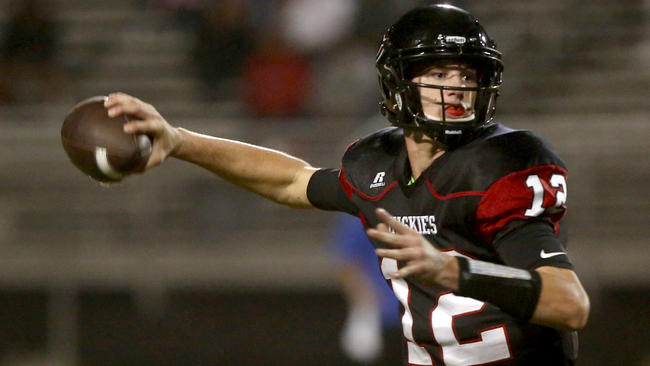 #5 Corona Centennial at #11 St. John Bosco
This should be the most fun game of the weekend. These two teams have met in the playoffs the last 4 years although this is the first time it wasn’t in the Southern Section title game. We know there will be a lot of scoring in the game as their always is when these two teams meet. St. John Bosco will have the home field advantage and does have the better defense. The problem this game does not come down to defense and Centennial might have the best offense in the country.
Corona Centennial 51 – St. John Bosco 48

#19 Rancho Cucamonga at #3 Mater Dei
The other California Southern Section semifinal should be quite the game as well although there should be much better defense in this one. We were ahead of the curve on Rancho Cucamonga and they rewarded us with a big win over Mission Viejo last week. It doesn’t get any easier this week going on the road to MaterDei. We know the game is being played at Orange Coast but lets be real Mater Dei has the clear advantage. We expect it to be a very tight game like when Mater Dei played Bosco earlier this year. Rancho Cucamonga has a great secondary that could give JT Daniels fits. Jaylon Redd should get the ball a ton in this one. The key will be if Rancho Cucamonga can play mistake free ball like they did last week. Bosco made some huge mistakes in their game against Mater Dei and it lost the game for them. It would not surprise us at all for RC to win but the we will go with a slight win for Mater Dei.
Rancho Cucamonga 21 – Mater Dei 24

#12 Mountain Pointe vs Chandler
This is a tough game to pick. We saw what happened when Mountain Pointe was healthy. The problem is they are no where near as healthy as the first meeting. We will go with the big revenge factor in this game and pick the upset.
Mountain Pointe 24 – Chandler 27

#13 Mill Creek at McEachern
This is a game of power vs finesse. McEachern will have the home field advantage but football games are won in the trenches and Mill Creek should control the line of scrimmage.
Mill Creek 27 – McEachern 20

#25 Center Grove vs Carmel
Center Grove has beaten the 2 other best teams in Indiana the past two weeks. The only way they lose this one is they come out extremely flat after the two big wins which shouldn’t happen in a title game.
Center Grove 21 – Carmel 14

#22 Catholic Central vs #14 Cass Tech
This should be a defensive game and even if Austin Brown plays he will be less than 100%. If he was full strength we might have given CC a slight edge but Donovan Peoples-Jones once again is the difference.
Catholic Central 13- Cass Tech 17

#6 Grayson at Colquitt Co.
Colquitt County has bounced back from an awful start to the season and does get the benefit of being the home team. That being said Grayson is the better team and Chase Brice should be able to exploit the Packers secondary.
Grayson 34 – Colquitt Co. 27

Derby vs. Blue Valley
Blue Valley is coming off a big overtime win but we expect this to be a repeat of last year with Derby bringing home the Kansas 6A crown.
Derby 35 – Blue Valley 24

Maryville at Oakland
Two evenly matched teams and unfortunately not a neutral site game. Oakland is at home and they have Jacoby Stevens, that should be enough for them to pull out a close win.
Maryville 24 – Oakland 27