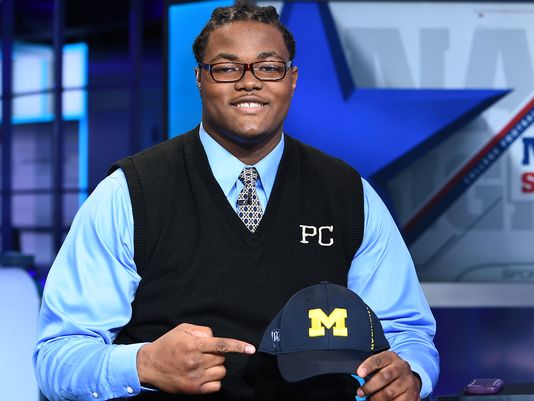 National Signing Day 2016 is all but in the books. There are a few guys left to sign, but for the most part the damage is done and once again it was ruled by the Alabama. The final rankings are the same as in most recent year with Alabama, FSU, Ohio State and 2 other SEC schools. You can see where all the recruits ended up on our Signing Day page.

1. Bama did what Bama does. This class means they will probably win 2 more championships in the next 4 years as long as Blake Barnett is good. Although as they showed this year it might not matter. The front 7 will continue to be scary good for years to come.

2. With the last 2 classes FSU should win a championship in the next 4 years. The winner of the Malik Henry and Deondre Francois will be a stud and the Seminoles have signed enough high level OL to be able to field a good line for years to come. Dontavious Jackson was the key signing today and they really need him to be as advertised because they have missed at ILB lately so they don’t have much depth at the position.

3. Michigan made the big splash by expectingly landing Rashan Gary but more importantly they sign good quality depth to compete with Ohio State for years to come. That being said this class alone doesn’t do enough to make them a playoff contender next year but look out in 2017.

4. AJ Brown had one of the hardest decisions of the day. He is probably the best athlete in the 2016 class, he an elite baseball player as well. He chose the rival of his hometown team. You can’t blame him as he will be catching passes from Chad Kelly and Shea Patterson for his career. I would love to ask players that do this how it works out after college. Are they shunned forever?

5. Losing out on AJ Brown really hurts for Mississippi State as they need play makers. That being said getting Jeffery Simmons was a huge get. Simmons is a monster that will keep the Bulldogs defense clicking for as long as he is there.

6. We are all for the signing day commitment videos. They are great and way better than the school commitment ceremonies. Most of these videos are done by recruits in the LA area since it’s easier to find video producers to do it.

7. How much money did Michigan raise from boosters today at the Signing Day party with Ric Flair, Tom Brady and Derek Jeter? My guess is plenty!

8. This was the least drama filled Signing Days in recent memory. There was a slight Rashan Gary hiccup but for the most part there were not any changing of minds after the fact or parents that wouldn’t sign LOIs.

9. Trayvon Mullen shocked most people by chasing the early playing time that Clemson can offer. Clemson desperately needed him for next year and he keeps them in the playoff talk.

10. Jonathan Kongbo was playing high school football in Canada in 2013, redshirting at Wyoming in 2014, playing JUCO in Arizona in 2015 and now in the SEC in 2016. That is quite an amazing journey.

11. Josh Jacobs is another amazing story. Three weeks ago he only had Wyoming and New Mexico State offers. Now he is headed to Tuscaloosa.

12. Tyrie Cleveland flipping to Florida was a big blow to Houston and a huge get for the Gators. The Gators needed another big play maker and Tyrie can be that guy. We are not the biggest Feleipe Frank fans but the more weapons he has the better.

13. Texas signed just about Errbody they wanted. The problem is they were all on the defensive side of the ball. Texas wasn’t known for their offensive proficiency last year and they didn’t do much to improve that with this class.

14. Nate Craig-Myers gives Auburn plenty have WRs to throw the ball to but nobody to throw it to them.

15. Kirby Smart salvaged a solid recruiting class at UGA by landing Mecole Hardman, but it could’ve been Top 3 if he kept Derrick Bown and EJ Price in state. At the end of the day it just all comes down to Jacob Eason living up to the hype.