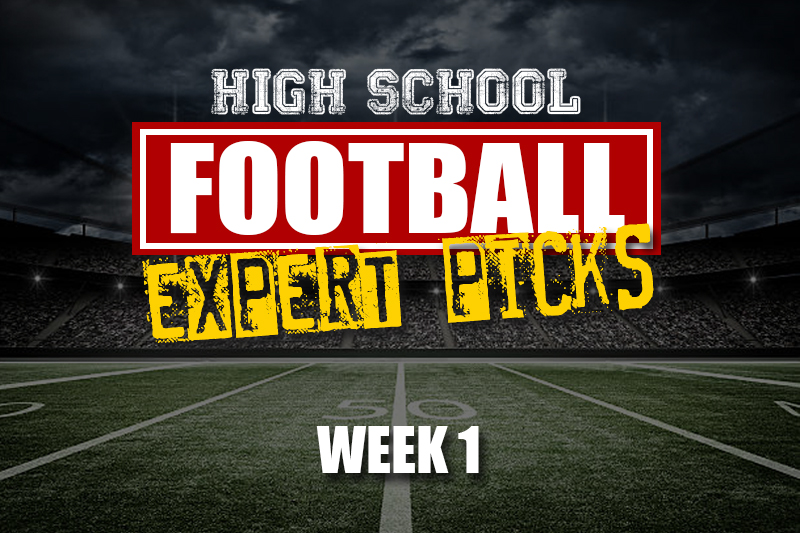 Week 0 is in the books and the experts knocked it out of the park. Brian and Zack each start off the year with a 9-1 record. None of the experts finished with worse than a 7-2 record and our consensus picks went 8-2. As I said on Twitter the experts mean business this year. The bragging rights that come with winning this contest are only topped by winning the Super Bowl! With that being said hopefully we all back up a strong week 0 with an equally strong week 1. This week is our biggest slate of games ever. There are so many good matchups that instead of the normal 10, you get 15 for the same low price.

The game of the week comes to us from Hawaii where we have a battle of nationally ranked teams. St. Louis is a Hawaiian powerhouse that gets their chance to prove themselves on the national stage. Bishop Gorman had a bad year by their standards last year and will be looking to show they are back to their old ways. Five of the experts have the Crusaders taking this one. There is also a matchup between what many consider the second best teams in Hawaii and Nevada this week when Liberty and Mililani square off. Needless to say Hawaii vs Nevada bragging rights are on the line between the two games.

Texas starts their season this week and there is a big grunge game going on in Houston. North Shore will be looking to take down Katy for the 3rd time in a row after beating them twice last year. Katy rarely loses to the same team three times in a row but North Shore is stacked once again. Six of the seven experts have the Mustangs winning again. In another interstate game this week Carol City and Northwestern will face off in Miami. The old district rivals (still cant believe they broke that district up) will now face each other with only bragging rights on the line. Carol City won the game last year but the Bulls got the ultimate crown by winning the state title. Both teams are coming off impressive week 0 wins. The only other in state game is in Ohio where Mentor and St. Edward square off. The winning becomes the early season favorite for the Division I crown which St. Edward won last year. Mentor will be looking for revenge from their regional finals loss. The experts don’t think they will get it.

The rest of the slate is all out of state games. These are the types of games that shape the national rankings for the rest of the year. We will get to see how good New Jersey is when they send two of their best to California and Florida. The experts unanimously picked against Bergen Catholic against St. Thomas Aquinas, but give the nod to St. Joseph Regional out in California in an Honor Bowl game. What many believe are the best teams in Pennsylvania and Georgia will meet up in Atlanta with St. Joseph Prep and Marietta battling. Both teams are ranked in most national polls. Trinity and Warren Central meet in a rematch of one of last year’s games of the year. Warren Central won that won 42-41 so the Shamrocks will be looking for revenge. The experts think they will get it. The top two teams in Alabama (Hoover and Central) head take on teams from Florida (Cocoa) and Georgia (Cedar Grove) this week. The experts have the Bama teams coming out on top. There is an Arizona vs California battle taking place at the Honor Bowl games as well with Saguaro and Cathedral matching up. Saguaro will be looking to validate their national ranking in the is one. Most of the experts think they will. Rounding out the schedule we have Gonzaga (DC) taking on American Heritage (FL), Archbishop Hoban (OH) taking on Harrisburg (PA) and Loyola Academy (IL) taking on ST. Ignatius (OH).

Don’t agree with the picks? Let us know about them on Twitter or in the comments below. Make sure to go follow all the experts for all your high school football and recruiting news. Follow us @PrepForce1 to keep track of the picks and to vote on each of the games to see if you can do better than we do. Also please follow us on Facebook @PrepForceOfficial and subscribe to our Prep Force YouTube channel to watch our world famous highlights.