Beyond The Game – Landen Lucas 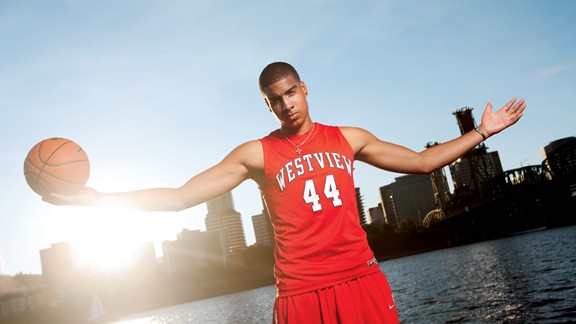 Most of you know Landen Lucas as the 6’10” center from Westview High School in Portland, Oregon who is a Kansas commit. What some of you may not know is what he is like when is not dominating opponents on the basketball court. Find out a little more about the best high school player in Oregon and what he thinks about playing in the Phog.

PF: Who is your favorite athlete?
LL: Shaq

PF: What’s your favorite food? What food do you eat on gamedays?
LL: Pasta or anything Italian

PF: What TV shows do you watch consistently?
LL: I switch up a lot but all time favorite is The Fresh Prince Of Bel Air.

PF: Whats your favorite thing to do when not playing sports?
LL: I like to listen to music.

PF: What is your favorite sports memory that doesn’t involve yourself?
LL: Watching my dads college highlights.

PF: Which pro player best reflects the type of game you have now?
LL: The player I play like is a different style Kevin Love.

PF: Do you play video games? Which ones? Have you beat any other recruits?
LL: I play some NBA2k and I beat some players while I was on my visits HAHA

PF: What type of music do you listen to, if any, right before a game?
LL: I like most kinds, R&B and gospel are my favorite. Before games i listen to instrumentals so i can keep my mind clear.

PF: Was the recruiting process everything you expected? If not, what things surprised you most?
LL: I was not expecting it to be as crazy as it was.

PF: What did you look for when deciding which college to attend?
LL: The main thing was a chance to improve and a chance to play.

PF: Which do you look more forward to, playing at home in front of excited, cheering fans? Or playing on the road in a more hostile environment?
LL: I always said on the road is my favorite, but after watching a game at Kansas its hard to want to play anywhere else.

PF: Which coach has meant the most to your career so far, and why?
LL: My AAU coach, Coach Ward. He helped get me to where I am today.

Dont forget to sign up for our FREE March Madness contest. We are giving away $600 in cash prizes! Fill out your bracket HERE