Beyond The Game – Matt Jones 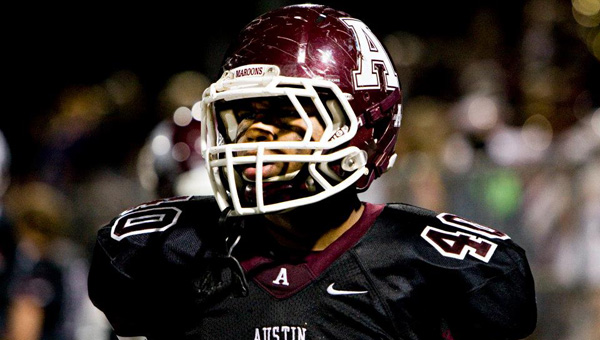 Now that 2012 Signing Day has passed its time to look ahead to 2013. Matt Jones is defensive lineman out of Austin High School in Austin, TX. He is a star of on the football field who is just waiting for his chance to star at the next level. Find out more about what Matt is like when he is not sacking QB’s on the football field.

Prep Force: Who is your celebrity crush?
Matt Jones: Meagan Good
PF: Who is your favorite athlete?
MJ: Ray Lewis
PF: What is your favorite sports memory that doesn’t involve yourself?
MJ: When Reggie Bush got blown up on a bubble route
PF: What movie character best describes your game and why?
MJ: Rudy, because I will never give up on anything in life.
PF: Which pro player best reflects the type of game you have now?
MJ: Ray Lewis
PF: Do you play video games? Which ones?
MJ: Madden 12 on Xbox 360
PF: What’s your favorite food? What food do you eat on gamedays?
MJ: Chinese food and before games I like to eat Chick-fil-a.
PF: What TV shows do you watch consistently?
MJ: Sports Center
PF: Is the recruiting process everything you expected? If not, what things surprised you most?
MJ: No I expected this whole process and I knew that it wasn’t going to be easy.
PF: Whats the most annoying part about the recruiting process?
MJ: To be honest, nothing is really annoying about this process, to be able to go and play ball on the next level is a blessing.
PF: What other sports did you consider before football?
MJ: Basketball
PF: What do you look for when deciding which college to attend?
MJ: The players that are already there and the coaching staff.
PF: Which do you look more forward to, playing at home in front of excited, cheering fans?Or playing on the road in a more hostile environment?
MJ: Playing at home, because you have your friends and family to support you.
PF: What type of music do you listen to, if any, right before a game?
MJ: Right before a game I love to listen to Drake.
PF: Which coach has meant the most to your career so far, and why?
MJ: Coach Rosenthal, because he will always push you to your limit.