Beyond The Game – Nick Banyard 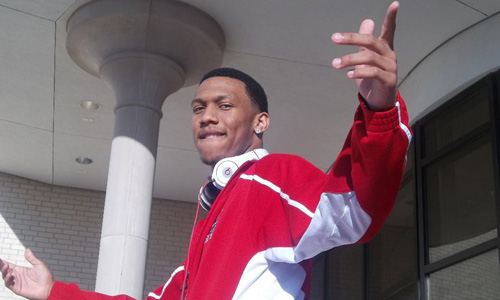 Today we get to know Nick Banyard, fresh off his dagger game winning 3 last night to take help Marcus High School take down Montrose Christian. You know his as the new Mexico commit who teams up with Marcus Smart and Phil forte to lead Marcus as one one of the best high school teams in the country. What you might not know is how he is when he is not dominating on the basketball court. See what drives him and what he does for fun.

Who is your celebrity crush? Adriana Lima

Who is your favorite athlete? Lebron James, Kevin Durant

Do you play video games? Which ones? Have you beat any other recruits? Call Of Duty, college football and NBA games. I beat Marcus Smart a lot and Phil Forte is the best at college football. I play Call Of Duty or Halo sometimes with Isaiah Austin and Jelon Hornbeak. Also played Jonathan Gray in NBA Jams and won a few but he beat me too along with everybody else.

What’s your favorite food? What food do you eat on gamedays? I like anything but sushi a lot. And I eat sour patches before every game

What is your favorite sports memory that doesn’t involve yourself? Probably watching my brother in his football game at UTEP against Houston.

Which pro player best reflects the type of game you have now? I say Lamar Odom reflects me best. He can offer so much more but doesn’t at some times. Kinda has an all around game and doesn’t do to much. I want that to change over the years but it’s just my role now.

Was the recruiting process everything you expected? If not, what things surprised you most? In recruiting everything surprised me. I never knew I would get so much interest showed towards me and me going to their college.

What other sports did you consider before basketball? What made you finally decide upon basketball? Football…I could of played on varsity my freshman year but my basketball coach said if I played football I wouldn’t be on varsity basketball. My mom and brother didn’t want me playing because I broke my wrist and collar bone.

What did you look for when deciding which college to attend? Basically how comfortable I was with the coach and team chemistry is so big with me. I saw that a lot with them (New Mexico). It’s a basketball city so that’s always nice.

Which do you look more forward to, playing at home in front of excited, cheering fans? Or playing on the road in a more hostile environment? Either or is fine with Me. I just love and live for a big challenge.

Which coach has meant the most to your career so far, and why? I would I have to say coach Danny Henderson. He’s an amazing coach and spends more time watching film and video to find the little things to fix the team and myself to better us at the end of the day. He’s the true definition of a GREAT high school basketball coach. He doesn’t yell a whole lot. He makes you better. All you have to do is listen and trust him. I could say so much more about him but to sum it up. He’s the best coach ever!