Myles Turner – The Rise Of A Star 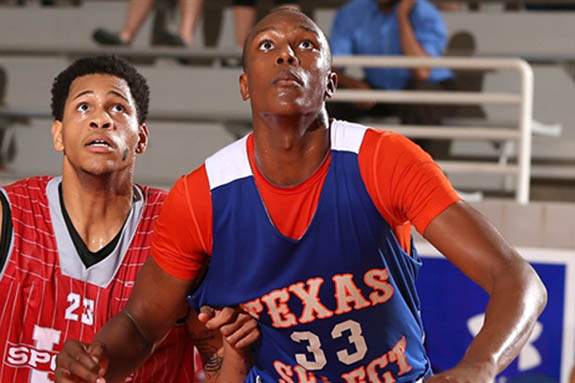 As everyone now knows Myles Turner is one of the best players in the 2014 class. He is being heavily recruited by every top school in the country. Coaches from Kentucky, Kansas, Georgetown and more have invested time into recruiting Turner. A year ago, that wasn’t the case. Myles has exploded on the scene but I am proud to say that Prep Force was one of the first to realize how special he was.

Last year this time Myles Turner was an under-the-radar prospect that appeared to be Texas’ sleeping giant. The smaller colleges in Texas were showing interest but only a handful of national coaches had started to pay attention to Turner. Myles had an injury that sidelined him for the entire AAU season, but luck for Turner sitting out last spring and summer didn’t cripple his recruitment like it has to others.

We first heard about Myles early in his junior season at Euless Trinity High School. We decided to go find as much footage as we could of him to see what he was all about. Needless to say we were more than impressed. We couldn’t believe that this kid was not considered a 5 star recruit. After all, 7 footers that are as versatile as Turner usually don’t go unnoticed. Once we found out about the injury it made more sense. There was no doubt in our mind that he needed his own highlight tape so that more people could witness his special talent. To date that highlight tape is one of the most viewed videos ever on Prep Force.

As his junior year at Trinity played out more and more people were starting to know the name Myles Turner. He led his team to the state tournament where they unfortunately got matched up with nationally ranked Hebron in the first round. That game ended his high school season, but now it was time for the spring/summer season that made Myles a star. The AAU season started with Myles leading his Texas Select team to the title at the 2013 Jayhawk Invitational in front of coaches from most of the Big 12 schools. The secret was out and the legend of Myles Turner was starting to grow. Based on his strong play he was invited to the NBPA Top Camp and Nike Skills Academy in June. His breakout performances at those two camps cemented Turner’s spot as one of the best players in the 2014 class. Soon every big name coach in the country was calling. All anyone could talk about was the 6’11 kid from Euless, Texas and all I could do was smile.

I am always intrigued by what happens with an athlete when they explode on the scene. In basketball it can be as early as 5th grade with the way the landscape is now. Myles was obviously one of the late bloomers. I had the pleasure of watching his game yesterday at Adidas Nations with his father, David Turner. I asked Mr. Turner if Myles ever got frustrated along the way. I am sure Myles knew that he had the talent to compete with anyone his age but he wasn’t being recognized for it. Mr. Turner told me that Myles “never got frustrated”. He knew that his injury had held him back and understood the process. “He just loves to compete and play basketball,” Mr. Turner said. This desire to compete was proven by him playing at Adidas Nations. Myles could have easily shut it down because he was dealing with an injury, but he didn’t. There is something to be said about playing through injury at tournaments like this. Most players shut it down if they even think they may get injured much less if they already are. I joked with him that Myles could shut it down after the game we were about to watch against Stephen Zimmerman. Of course I was just being selfish but I wanted to see the two big men matchup and thankfully I got my wish.

The other thing that really impresses me about Myles’s character is his desire to finish his high school career at his public school with all his friends and teammates. This is almost unheard of in today’s high school basketball. Most elite players find their way to either the local private school or the national power. There were rumors that Myles might be transferring to national power Prime Prep to play with his friend Emmanuel Mudiay. Mudiay himself gave legs to the rumor by tweeting about it last week. Mr. Turner confirmed at Adidas Nations that Myles would be staying at Trinity. It makes me happy to know that there are still some kids out there that understand the balance between basketball and life. Once again I smile

Behind every great person there are usually great parents. That is definitely the case with Myles Turner. Although we have exchanged emails and text previously, yesterday was the first time I actually met either of the Turners. I had taken my seat getting ready to film the game that Myles was playing in. By coincidence Mr. Turner was sitting next to me so I decided to introduce myself. It could have easily been a two second conversation with him blowing me off after a quick hello, but that wasn’t the case at all. We started talking about Myles, the game and multiple other topics. I have met all types of parents at these events and its always refreshing to meet the ones that are willing to just be real with you. There was no hidden agenda; it was just two guys talking basketball. Sometimes I would look over and he would be texting away on his phone. He told me he was texting with Mrs. Turner and joked that she was always wondering how things were going. One thing is certain with the Turner family – family is really before everything else.

At the end of the game Mr. Turner told me thanks for everything we have done for Myles and that Prep Force was a big part of Myles’s success. I know well and good that Myles would be a big star now without our help but it felt good to hear his appreciation. I told Mr. Turner that it was a pleasure meeting him. Not because that’s how most first encounters end, but because it’s what I tell all the quality people I meet in my life no matter if it’s the parent of a basketball star or the person at my local coffee shop. The Turners are definitely quality people and they have raised a quality son with a good head on his shoulders. I look forward to following the rest of Myles’s basketball career for many years to come and I know that his parents will be there for him every step of the way.

If you haven’t had the pleasure of seeing Myles play live yet he will be on ESPNU tonight at 9 EST/PST taking on a team lead by fellow star center Jahlil Okafor in the finals of the Adidas Nations tournament.
Myles Turner Highlights