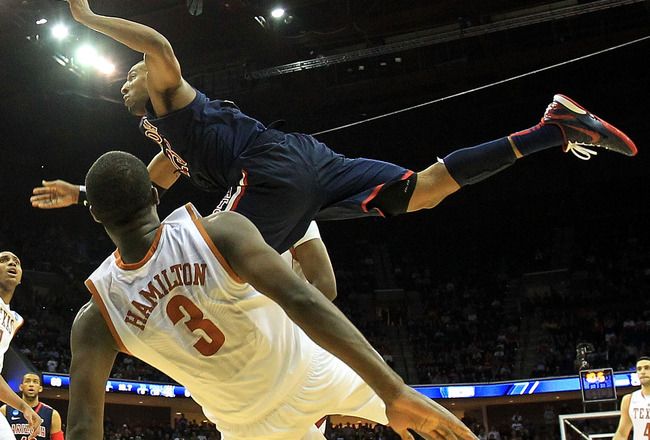 This week in the Prep Force Challenge we have a great matchup between Arizona and Texas. They met in a great game last March in the NCAA tournament won by Arizona. Who would win a game between NBA players from each school. Both of these schools have enough players to put two solid teams in this challenge and are two of the most complete teams. Lets break it down position by position and at the end you decide who would win the matchup.

Point Guard – Gilbert Arenas vs DJ Augustin
Gilbert Arenas has had his better days due mostly to non basketball related issues but he still is under 30 and he can still score on anyone. DJ Augustin is a solid point guard who performed well as a starter last year. He needs to become a better shooter and he would really thrive.

Small Forward – Richard Jefferson vs Kevin Durant
Richard Jefferson is a good pro who has had a solid career. He actually had his best shooting season of his career last year but he would clearly be overmatched in this game. Kevin Durant is one of if not the best players on the planet right now. Texas benefits more than any school from the college one year requirement.

Power Forward – Derrick Williams vs Lamarcus Aldridge
Derrick Williams is a great young talent in this league but it will take him a few years to reach his full potential. Lamarcus Aldridge is a very underrated power forward that showed how great he was when he had to become the man for the Blazers last year. Needless to say this would be a fun athletic matchup to watch.

Center – Channing Frye vs Dexter Pittman
Channing Frye has bossomed in the up tempo game with the Phoenix Suns. I could see this Arizona team running with the personnel they have so that would be good for him. Dexter Pittman is the only true center that Texas has but Pittman has not done much for the heat and I could see Texas going small and putting Tristan Thompson in for this matchup.

Bench – Arizona – Jerryd Bayless, Jason Terry, Luke Walton, Chase Budinger, Jordan Hill
Texas – TJ Ford, Cory Joseph, Maurice Evans, Jordan Hamilton, Tristan Thompson
This is the first game of the challenge where both teams have complete benches. Arizona has a true backup at all five postitions. They also have one of the best 6th men in the league with Jason Terry. Texas doesn’t have a true backup center but as mentioned above Tristan Thompson is more than capable in this matchup.

Conslusion
I can see these two teams running up and down with the great scorers and athletes on both sides. These two teams are very simlilar in a lot of ways and I would love to see how this played out. It would be another classic game between these two great schools. Let me know who you think would win.