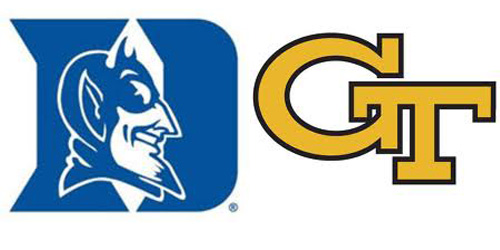 The first matchup of the Prep Force Challenge pits Duke vs Ga Tech. This is without a doubt one of the best matchups of the first round. If you were to base this purely on who has more players in the NBA this wouldn’t be close as Duke has many more. That is not what this challenge is all about. Its about who would win if these two teams played each other. Lets break it down position by position and at the end you decide who would win the matchup.

Point Guard – Kyrie Irving vs Jarrett Jack
Kyrie is the #1 pick so there is some questions as to how good of a pro he will be. If he is not as good as Chris Duhon then I think its safe to say he is a bust at the #1 pick. That being said Jarrett Jack is a more than serviceable point guard who could hold his own in this matchup.

Shooting Guard – JJ Reddick vs Anthony Morrow
JJ Reddick was the only true shooting guard on the roster for Duke so he got the starting nod. Duke is deep at small forward so I could see Cory Maggette getting some run at the 2 spot. Anthony Morrow is a better shooting, more athletic JJ Reddick. If Georgia Tech played inside out as I’m sure they would, Morrow would get a ton of good looks and he is a top 10 3 point shooter in the league.

Small Forward – Luol Deng vs Thadeus Young
This would be a fun matchup to watch between two athletic 3’s. Luol is clearly the better of the two players and this is a matchup Duke would really have to rely on exploiting.

Power Forward – Carlos Boozer vs Chris Bosh
This is a matchup of both teams best players. Fortunately we can just look back to last years conference semifinals to see how it would play out. Bosh got the better of Boozer in that matchup putting up 23/8 compared to 14/10. Bosh also shot 60% compared to Boozer’s 40%. When you look at the names you would not think it was that big of a difference between the two players, but the head to head matchup shows differently.

Center – Elton Brand vs Derrick Favors
Neither team has a true center so they both have to start power forwards in the center spot. Elton Brand is nowhere near the player he once was and Derrick favors is entering his second season. At this point Brand is still the better player but I could see Favors making some leaps forward this year.

Bench – Duke – Chris Duhon, Mike Dunleavy, Corey Maggette, Grant Hill, Shane Battier, Josh McRoberts, Sheldon Williams
Georgia Tech – Will Bynum, Iman Shumpert, Gani Lawal
Here is the biggest difference in these teams. Duke’s problem is that most of the good bench players are small forwards. Some would have to come in and play some shooting guard (Maggette) and power forward (Battier). McRoberts and Williams would give them the big man advantage over Ga Tech but that is by default as Ga Tech really has no big men backups. For Ga Tech they are set with guard backups in Will Bynum at the point and Iman Shumpert at shooting guard. They run into serious problems in the front court. The best thing that happened for them is that Gani Lawal actually got into a game last year so he could be included in the challenge. He could come in and spell Favors who would undoubtedly get tired which would push Bosh to center. Its not the best situation for Ga Tech but its better than if he had not got into that game last year.

Conclusion
I think Ga Tech would have the advantage with the starting 5’s unless Kyrie Irving is Chris Paul right out of the gate. The question would be if Ga Tech has enough big men to hold on for the entire game. I would love to see this matchup play out to see what happens. Let me know who you think would win.

Update: Duke wins this matchp and will advance to face the winner of UNC vs Wake Forest. Vote on that and all upcoming matchups!

Who will win this game?