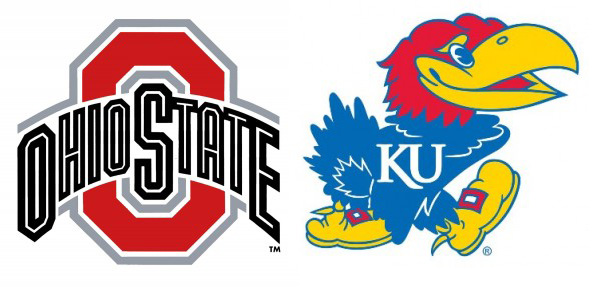 This week’s Prep Force Challenge matchup pits the Ohio State Buckeyes against the Kansas Jayhawks. Kansas has a rich basketball tradition while Ohio State is more knows for its football program. While Ohio State will always be a football school the basketabll team has made tremendous strides in the past 5 years and is now a perennial top 10 team. Lets break it down position by position and at the end you decide who would win the matchup.

Point Guard – Mike Conley vs Mario Chalmers
Mike Conley has been a solid PG for his career averaging around 12 PPG 6 assists with a 3-1 assist/turnover ratio. He is also a great defender but not a great shooter. Chalmers has not really had to be a big time ball handler since he is on a team with Lebron and D Wade. He has turned into a great shooter but he is not a great assist guy. Kansas also has Kirk Hinrich but I think Chalmers is better in this matchup.

Shooting Guard – Michael Redd vs Brandon Rush
Michael Redd was one of the best SG in the NBA during the prime of his career. Unfortunately for him that career is pretty much over. Brandon Rush has put together some solid if not spectacular years. He is becoming deadly from 3 ball range.

Small Forward – Evan Turner vs Paul Pierce
Evan Turner may become one of the leagues best wings as he gets older. Paul Pierce is and has been one of the best small forwards in the NBA for years. Pierce would give Kansas a proven go to guy at the end of the game which we all know is so key in the NBA.

Power Forward – Kosta Koufos vs Drew Gooden
Koufos has not got a lot of game time in the league due to his limited offensive game. He is a decent rebounder and defender. Drew Gooden has been a solid 12/8 guy for most of his career and it would be hard for Koufos to keep up with him running around.

Center – Byron Mullens vs Nick Collison
A change of scenery has seemed to help Mullens finally become a true NBA player. Finally getting playing time, he is putting a a respectable 13/5 this year. Collison is more PF than he is center but I think if I were a coach I would rather have him on the floor over Cole Aldrich. If the matchup was not working Kansas has plenty of big men to throw at Mullens.

Ohio State like most colleges in this challenge is short on backups. The hardest part about evaluating this game is what to do about Greg Oden. Yes so far he is an all time bust and is currently injured. When doing this challenge I still included injured players that actually have a chance to come back. In the little time Oden has actually played he has been solid. Ill just go with Oden being slightly worse when he finally makes it back and put him as a backup big man. Dequan Cook give OSU a guard off the bench to provide some depth. Kansas has a true bench with backups at every position and a gluttony of power forwards.

Conclusion
Ohio State is solid but not spectacular at every position. They would have to hope that mike Conley could create open shots for everyone. Kansas is balanced and deep. They do have the star power of Pierce who is by far the best player in this game. I’m sure with all their bench and athletes Kansas would try to run the short handed Buckeyes to death. Who do you think would win?