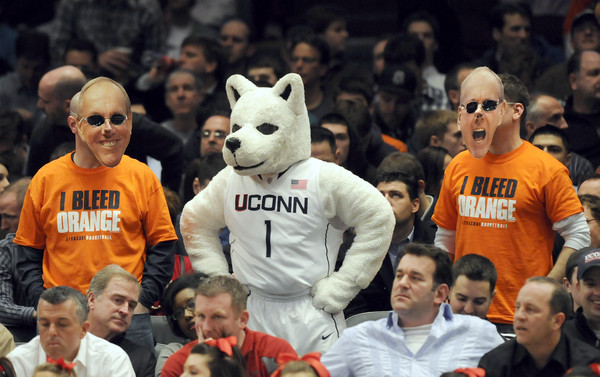 This week in the Prep Force Challenge we have a classic matchup of Big East (well until Syracuse bails) powers. This is another matchup of star power and short bench vs. an all around solid team with solid backups. Lets break it down position by position and at the end you decide who would win the matchup.

Point Guard – Kemba Walker vs Jonny Flynn
Kemba showed last year in the NCAA tournament that he is a winner and has the heart of a champion. Will it carry over to the NBA only time will tell, but he is off to a good start. Jonny Flynn came to the NBA highly regarded but his career has been on a steady downtrend since his rookie year. This would be a fun matchup to watch.

Shooting Guard – Wesley Johnson vs Ray Allen
Wesley Johnson hasn’t lived up to his #4 pick billing. Ray Allen is the best shooter to ever play in the NBA. Even though he is getting near the end of his career he is still leaps and bounds better than Johnson.

Small Forward – Carmello Anthony vs Rudy Gay
This is the one position were Syracuse has the clear advantage with Carmello. Good thing for U Conn that Rudy Gay is arguably thier best player as well so the advantage is not that large. These two would defitniely go at it since Carmello would have to carry the scoring load for Syracuse.

Power Forward – Hakim Warrick vs Charlie Villanueva
Both of these palyers have had serviceable NBA careers while playing different styles. Warrick is an undersized athletic power forward who attacks the basket while Villanueva is bigger but spends a lot of time out by the 3 point line.

Center – Donte Greene vs Emeka Okafor
Donte Green is much closer to a small forward then he is a center. AT 6’11 he would have to do his best down low for this team since they have limited options. Okafor may not have lived up to the expectations of a #1 draft pick but he has been a good pro. This is another position that clearly goes to U Conn.

Bench – Syracuse – Andy Rautins, Etan Thomas
U Conn – AJ Price, Ben Gordon, Richard Hamilton, Caron Butler, Hilton Armstrong, Haseem Thabeet
Andy Rautins is in Spain now but he makes the team because he played last year. Etan Thomas was a backup center most of his career and that career is pretty much over. If Donte Greene was getting abused down low he could come in to help out. U Conn has good backups at every position. They have their spark plug 6th man in Ben Gordon. Richard Hamilton can come in to give Ray Allen some rest. Caron Butler can come in to help Gay with Carmello. They are not that strong in teh front court but they certainly are better than Etan Thomas.

Conclusion
I could see Syracuse trying to run to turn this game into a street ball style track meet. The problem is with no backups they are certain to get tired. The X factor would be if Carmell could hang 50 to keep it close to the end. I imagine U Conn would slow the game down run some offense to get their shooters open shots and even if they miss tehy should be able to control the boards. Let me know who you think would win.