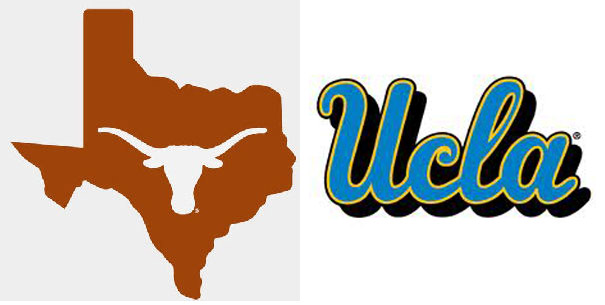 This week we have a battle of the best of the Big 10 and Pac 12. Texas and Arizona both produce a lot of NBA talent as well as some of the NBA’s best young players. This game would have two interesting story lines. Russell Westbrook going against Kevin Durant and Kevin Love battling Lemarcus Aldridge. These two schools are the only two that have more than one 2012 NBA All-Star. Let’s break it down by position and you can vote at the end on who you think would win.

Point Guard – DJ Augustin vs Russell Westbrook
Both of these players were taken in the top 10 of the 2008 NBA draft. They have completely different styles as Augustin is a more traditional point guard whereas Westbrook is a score first point guard. DJ got the better of him in 2007 when they played against each other in college. The NBA matchups have been all Westbrook.

Shooting Guard – Daniel Gibson vs Aaron Afflalo
Gibson and Afflalo have both become steady NBA players. Gibson more as a spark plug off the bench and Afflalo as a starter. They put up very similar numbers with Afflalo being a better scorer. They are both 40% 3 point shooters, but Afflalo gets a few more easy buckets.

Small Forward – Kevin Durant vs Trevor Ariza
Trevor Ariza has one thing Kevin Durant does not. A NBA championship ring that he got when he played a key role with the Lakers. Other than that Kevin Durant owns this matchup. He is unquestionably one of the best players in the NBA right now and would be the key to Texas winning this game.

Power Forward – Kevin Love vs Lamarcus Aldridge
This is a matchup of 2 of the best power forwards in the NBA. They are both Western Conference All-Stars this year. These two always matchup tough against each other when they meet in the NBA. Kevin Love has the slightly more complete game so he gets the slight edge.

Center – Dexter Pittman vs Ryan Hollins
For as complete as these two teams are both struggle at the center position. Ryan Hollins has never done much in the NBA despite being 7 feet tall. Pittman is stuck on the bench in Miami which if you know anything about the Heat’s big man situation that means he is not very good. That being the case I’ll go with Pittman being younger as the advantage here.

UCLA has the back court advatage of the benches with Jrue Holiday and Darren Collison both being NBA starters. TJ Ford had a decent NBA run but has slowed down in recent years and Jordan Hamilton is starting to come on recently but is still unproven. Cory Joseph has not found his spot in the NBA yet outside of mop up duty. The front court advantage goes to Texas just because they actually have big man backup in Tristan Thompson. UCLA has decent wings and Mbah a Moute could fill in at PF.

Conclusion – This is a game that would be fun to watch based on the star power alone. I’m sure Russell Westbrook and Kevin Durant would want to show each other up. The matchup at power forward would be fun to watch as well. UCLA would have the guard play advantage, but I could see Texas trying to pound them down low. In the battle of All-Star combos (Durant and Aldridge vs Westbrook and Love) who would come out on top?

Who do you think would win this game?
Vote Now!

Check out the other matchups HERE