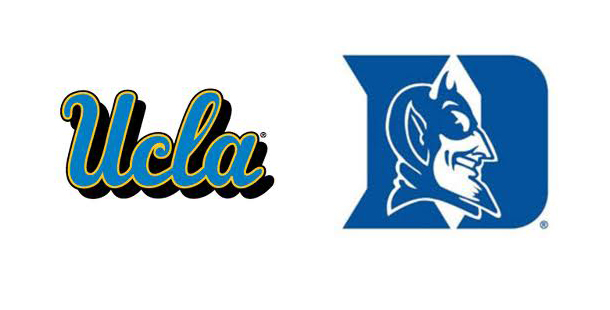 It’s March Madness time and we have made it to the Final 4 of the Prep Force Challenge. The first game is between UCLA and Duke. These two schools along with Kentucky currently have the most players in the NBA so it’s no surprise that they made it to the Final 4. This game could closely resemble what an actual NBA game could look like. Lets break it down by position and at the end you decide who will make it to the finals.
* Don’t forget to enter our actual FREE MARCH MADNESS CONTEST to win $600 in cash by filling out your bracket HERE

Point Guard – Russell Westbrook vs Kyrie Irving
This is the second best point guard matchup in this challenge with Rondo vs. Rose being #1. These players are very similar in that they are shoot first point guards who are very quick and love to get to the basket. Westbrook has a slight advantage in that he is a better rebounder and defender. That probably has a lot to do with his experience advantage. For the long term I would rather have Kyrie but for a game right now give me Westbrook.

Shooting Guard – Aaron Afflalo vs Gerald Henderson
Aaron Afflalo is a very solid shooting guard that can shoot (40% 3 point shooter) and score which would serve him well playing next to Westbrook. Some Duke fans feel Gerald Henderson should start over JJ Reddick and in this matchup I agree. I think JJ is the better overall player but in this matchup Gerald is bigger so he would be better to guard Afflalo. Henderson is getting a lot of run and taking a good amount of shots for a bad team now which makes his numbers look better than they really are. I call it the Rick Fox mirage. That being said if he could ever develop a 3 point shot he could become a really good player.

Small Forward – Trevor Ariza vs Luol Deng
Based on names this sounds like a mismatch but it’s actually a pretty close matchup. Ariza is a do everything small forward that actually has a higher PER than Deng this year. He is a great defender that matches up well with Deng. That said Deng is all that and a better scorer and rebounder so he gets the edge.

Power Forward – Kevin Love vs Carlos Boozer
Kevin Love is the best power forward in the game right now, and really has been for the past two years but he is finally getting his due. He can do it all as shown by winning the 3 point contest during All Star weekend. Carlos Boozer is having his normal solid year where he shoots over 50% although his scoring and rebounding are down slightly.

Center – Ryan Hollins vs Elton Brand
The center matchup would be decidedly in Duke’s favor. Ryan Hollins is a 7 footer who has never really done much in the NBA, but since his size is at such a premium he has stayed in the league. What Brand lacks in size for this matchup he more than makes up for with skill. Duke could even start on of the bigger bench guys they have here and still be fine

Bench – UCLA – Jrue Holiday, Darren Collison, Baron Davis, Jason Kapono, Matt Barnes,Luc Richard Mbah a Moute, Dan Gadzuric
Duke – Chris Duhon, JJ Reddick, Mike Dunleavy, Corey Maggette, Grant Hill, Shane Battier, Josh McRoberts, Sheldon Williams
Both teams have complete benches with UCLA holding the backcourt edge and Duke with the edge in the fron court. Jrue Holiday and Darren Collison are both solid NBA starters right now. Matt Barnes is a decent not great backup on teh wing. Mbah a Moute could play backup at the 3 or 4 spot and is serviceable. Gadzuric would not provide much help other than to spell Hollins for a few minutes. Chris Duhon has seen his better days but he is still a fine backup for Kyrie. We talked about JJ above and he would be a nice backup for this team. Duke has an abundance of backup wings in Dunleavy, Maggette, Hill and Battier. It would be interesting to see how those minutes got doled out in a game. While McRoberts and Williams are not great big man backups, they are much better than anything UCLA has on the bench.

Conclusion
UCLA has the best two players in the game while Duke is an overall more solid team. The only clear cut advantage in this game is at the center spot but that advantage is neutralized by the power forward matchup. Like most NBA games it would probably come down to the final 2 minutes and the team that executed best would win. It is up to you to decide which team that would be.