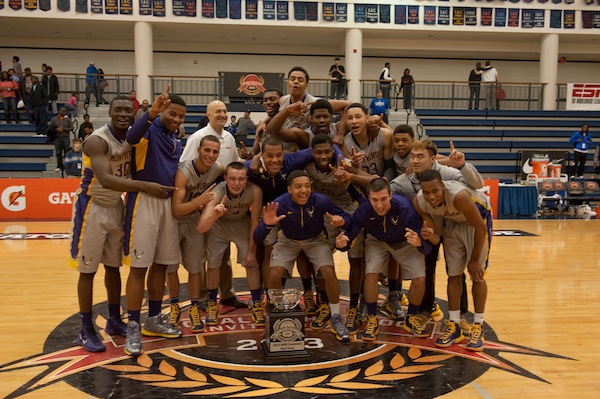 The National High School Invitational was a great end to the high school basketball season. From the first game to the last there was drama throughout. There were a few OT games but no game was better than the final. Montverde Academy beat St. Benedict’s 67-65 thanks to a Jalyn Patterson 3 in the final seconds to take home the NHSI title and the top ranking in the final Prep Force rankings. Montverde benefited from the great play of 2014 G D’Angelo Russell and the most impressive sophomore I saw all year in Ben Simmons. It was the first time Ben Simmons had played with Montverde all year which made it even more impressive. Dakari Johnson played well throughout and in a post game interview said that he would win another title next year at Kentucky. St. Benedict’s ends the season #2 thanks to a semifinal win over Findlay Prep. The win ended Findlay’s 54 game winning streak and put an end to Nigel Williams-Goss’s brilliant high school career. The top 4 teams in the NHSI end up in the top 4 of the rankings with Lone Peak rounding out the Top 5. I wouldve loved to see Lone Peak compete in this tournament as they played great all year. We are excited for next year already as well as can’t wait to see some of the great seniors continue their careers in college next year.

Don’t agree with the rankings? Think your school should be ranked? Let us know about them in the comments section below!
Fans JOIN NOW to keep track of your favorite players and their latest updates
Follow Us on Twitter @PrepForce1
Become a fan on Facebook HERE
To check out more Video of some of the best HS basketball athletes in the country click HERE