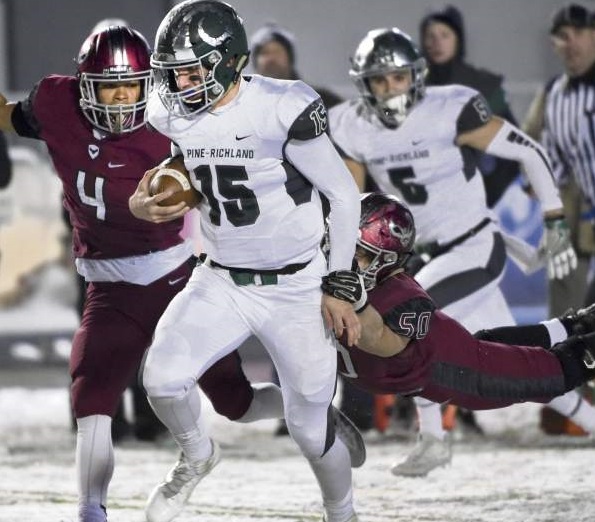 Another week is in the books and that means there are only 2 weeks left in the season. Usually that means that only California and Texas would have games left but thanks to the snow in Georgia we get extra games this week. The big move this week is by new #9 Pine-Richland fresh off their easy 41-21 win over previous Top 10 team St. Joseph’s Prep. The Rams were led by Notre Dame QB commit Philip Jurkovec who was responsible for 5 touchdowns. The Rams end the season as the best team in what was a great year for Pennsylvania.

Florida title games were responsible for some shake this week as well. 6A champ Miami Northwestern moves up a spot after their win over previously ranked Armwood. We know we have the Bulls ranked higher than any other poll but we stand behind it. Their loss to #2 IMG was in a game they played without their head coach and they held the Ascenders to a season low 21 points. The Bulls had one of the top 3 defenses in the country. The 7A title game was won by Venice which allows them to debut at #22. The Indians also only suffered one loss on the season and like Northwestern that came at the hands of IMG. Pickerington Central gets into the rankings this week thanks to Armwood dropping out. The battle for the last spot was tough and its far from a certainty they will be included in the final poll.

This week’s slate of games is highlight by the California open division finals, Texas semifinals and the Georgia rescheduled finals. Check out who the experts pick in the Top 10 games of the week in the Pickem Contest later this week. Also follow us on Twitter @PrepForce1 and like us on Facebook PrepForce to keep up with our weekly rankings and predictions as well as our world famous highlights. We have started releasing some early season highlights so go watch them.