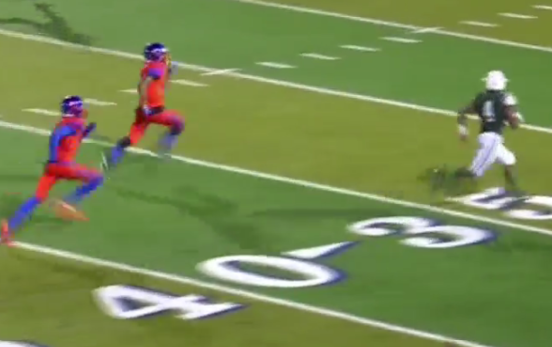 Week 3 of the season is in the books and it was a crazy one. Most of the state of Floida didnt play due to Hurricane Irma but one of the teams that did came away with the win of the weekend. Miami Central traveled cross country to Las Vegas and beat Bishop Gorman. The Rockets came out focused and their run game was too much for the Gaels to handle. Irma changed paths slightly while the Rockets were in Vegas but the Rockets played the game for everyone back home and it showed. It was a great feel good story watching the fans celebrate in the stands knowing they had a bit of a reprieve before going back home. Bishop Gorman is still a very good team and definitely still one of the best 25 teams in the country. Their tough scheduling finally caught up to them in a year where they aren’t quite as talented as usual. They have another tough game with #10 De La Salle this week that will come down to the health of QB Dorian Thompson-Robinson who came out late in the game with an apparent shoulder injury.

The biggest disappointments of the week were the top New Jersey schools. Ranked teams St. Joseph Regional and Bergen Catholic lost and fringe teams that were close to being ranked, St. Peter’s Prep and Paramus Catholic, also lost. St. John’s College (DC) and St. Joseph’s Prep (PA) enter the rankings thanks to wins in those games. Chandler also took a loss this week to drop from the rankings. We actually picked against the Wolves in the expert picks for the weeks as we thought missing QB Jacob Conover would be much to overcome in the rivalry game. Ben Davis (IN) makes their debut this week coming off an impressive 40-7 win at Center Grove. The Giants can back up the win this week with another good win when Warren Central comes to town. That games is sure to be in our Top 10 games for our experts picks this week. Judson (TX) also makes their debut this week thanks to Lake Travis taking down Steele. The Rockets already have a win over Lake Travis this season.

There is a another good slate of games this weekend. Check out who the experts pick in the week Pickem Contest later this week. Also follow us on Twitter @PrepForce1 and like us on Facebook PrepForce to keep up with our weekly rankings and predictions as well as our world famous highlights once the season starts.