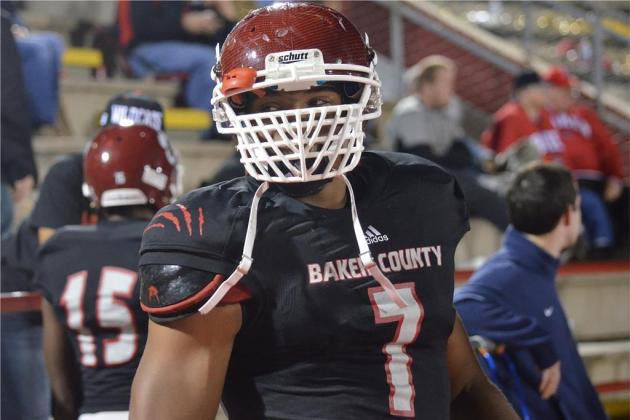 1. If CeCe Jefferson makes it to Florida, which I think he will, I think he will thrive. Look at the last 2 parents that wouldn’t sign LOI’s. Landon and Alex Collins became stars. I think wanting to prove your parent wrong is a great driving force. I think this is some mom & dad drama not football drama which is unfortunate.

2. Soso Jamabo is the most entertaining guy in this class, and a great player too. He won’t have any trouble with the Asian girls at UCLA.

3. Terry Beckner has the talent to be a day 1 starter and star at FSU. After seeing his emotional announcement with his family he made right choice staying “home” at Mizzou.

4. Jimbo Fisher did a great job with the FSU class. He filled areas of needs with studs. It would’ve been perfect if #Noles just landed 1 more stud DT. They need some depth there.

5. Jim McElwain got too much credit for the Gators class. Martez Ivey and Cece Jefferson were going there even if I was coach. Byron Cowart and Jeff Holland were big misses and players who would’ve actually given him a Florida level class.

6. I was sure Roquan Smith was going to UGA, I even prematurely tweeted it. I still believe that he will end up with the Dawgs. That being said I commend him for wanting to get away from home. I think that is a good thing for most of these big time recruits.

7. Chuma Edoga is a smart guy. If he doesnt make the NFL, he will still make bank as an app developer. Great backup plan!

8. If a top recruit says he cant wait to battle another top recruit fans should be very happy. That is another reason I think Cece Jefferson will be great. Martez Ivey and Cece Jefferson are going to have some all out battles in Florida practices. Will make them both much better players and future first round draft picks. Competition breads greatness.

9. The Daylon Mack & Myles Garrett combo will be unstoppable for Texas A&M. Mack is a BIG time player that is just what the Aggies needed.

10. Cordell Broadus clearly wants to be his own man and he is doing that. He will be a huge success in life if not in football then elsewhere.

11. I went ahead and put in all future 247 Crystal Ball picks for top Junipero Serra players to USC. At some point they all seem to commit there. It’s one of the best pipelines in the country.

12. Equanimeous St. Brown made his parents and all Notre Dame fans proud by showing his intelligence at his ceremony. It was quite refreshing and my favorite of the day. If he became president one day it wouldn’t surprise me.

13. Iman Marshall took the announcement game to a new level with his video. Helps living near Hollywood. He will be an all time great for USC.

14. If Deondre Francois was an early enrollee at #FSU he would be the #Noles starter. He’s that good. If FSU has a couple of losses by November I fully expect to seem his starting.

15. Alabama signed a great class but the long term success ultimately comes down to Blake Barnett becoming a star. He is the player that is the key to more titles.

16. Damarkus Lodge will learn a lot from Laquon Treadwell and that will help him reach his full potential at Ole Miss.

17. Thought there was slight chance Torrance Gibson might flip based on J.T. Barrett being in the way. Ultimately he made the right decision as the Ohio State system is a perfect match for his skill set.

18. Rico Mcgraw and Terry Godwin committing to UGA were big in saving what appeared to be a great class and then didn’t and then did.

19. Terry Godwin put the cap on a great day of ceremonies by creatively revealing his commitment by using his family wearing t-shirts.

20. I can’t wait until next year’s Signing Day to see how the Urban Meyer vs Jim Harbaugh battle unfolds.