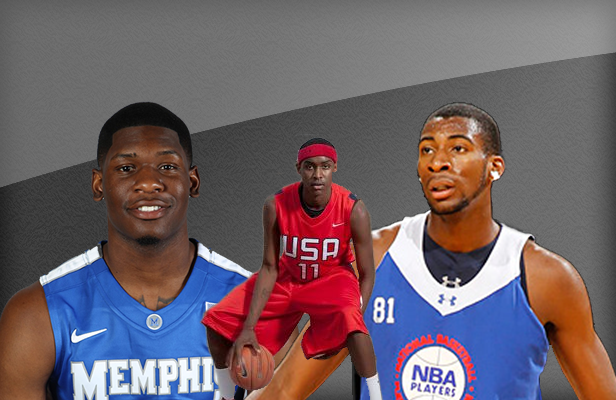 #1) Andre Drummond – C – UCONN
Man among boys is the very first thought when you see Drummond on the court, 6’10” and 275 pounds of muscle. He should be the first player to walk off any bus he ever rides in because it will immediately put doubt into the minds of his opponents. He’s tough, long, and can simply dominate the paint on the offensive and defensive ends of the floor. Drummond is a huge addition to the reigning Champs, and could be the reason why the Huskies, once again, cut the nets down.

#2) Michael Kidd–Gilchrist – SF – Kentucky
He still doesn’t have the best looking shot, but he doesn’t have to in order to dominate on the
court. At 6’7” Kidd–Gilchrist is the player that everyone will watch and over-analyze throughout
the year. Fair? Probably not, but if there is a player in the country that can handle that kind of
pressure it’s Kidd–Gilchrist. He’s tough, determined and will do whatever he can to help his team
win. He certainly has the ability to score 20+ in any game, but if the shots aren’t falling he is
talented enough to control a game by hitting the glass, defending and demanding the very best
from his teammates.

#3) Brad Beal – SG – Florida
Possibly the best shooter in the freshman class, Beal has coaches living in fear of him getting any
room to get his shot off. Although, Beal isn’t just a shooter, at 6’4” Beal is long, strong and athletic.
He can use his ability to shoot to set up his ability to get to the rim, or he can use his ability to get
to the rim to open up room for his shot. He can rebound and go, create and is terrific at using his
length in the passing lanes to create turnovers for easy buckets. Beal will be consistent from day
one and he isn’t afraid to take the big shot in a game. His willingness to work on getting better
every day, paired with his confidence, are reasons why we think Beal will be talked about as one of
the best freshmen in the land.

#4) Austin Rivers – SG – Duke
Attention ACC!!! Good luck! Let’s be honest here, there are only a handful of coaches in the
country that guards should consider playing for because their systems fit the skill-sets of guards. In
the spread the floor, penetrate, create or score attack that the Blue Devils run Rivers will thrive. If
he gets hot he might just torch you for 30+. His confidence is key and Rivers has a lot of it. He
takes it personally and has the ability to take his game to a level that not many can match, and it’s
not only on the offensive end of the court. At 6’4” Rivers will frustrate smaller guards on the
defensive end of the court. He can rebound and go as good as any incoming freshman in recent
memory.

#5) Anthony Davis – PF/or anywhere he wants to be on the court – Kentucky
He’s 6’10”, long, athletic, skilled and a winner. Davis is the total package. Why #5? We feel that
Davis will have games that make Big Blue Nation tell everyone, and they will certainly tell
everyone, that he is the best player in the world. He will also have games that show he isn’t. His
frame needs muscle and there will be nights that will clearly show this. When up against players
that are also 6’10” and athletic, but with experience and strength, Davis will likely struggle to stay
out of foul trouble as he’s trying to defend those bigger and stronger opponents. However, his
ceiling is the highest of any freshman and it shouldn’t be a surprise if John Calipari adds another
one of his players to his list of #1 overall picks in the NBA draft.

#6) Adonis Thomas – SF – Memphis
Simply put, Thomas is the best defensive player in the class. He’s got an NBA body, athleticism and
toughness. He takes his ability to lock down opponents seriously. The Memphis native appears to
be just what the tremendously talented Tigers need to make another run at the National Title.
Thomas can defend, score and is a terrific rebounder from his position.

#7) LeBryan Nash – SF – Oklahoma State
Speaking of match-up problems, Nash might be ranked #1 for incoming freshmen in that regard.
At 6’7” Nash brings tremendous athletic ability and an NBA body to the Cowboys. There aren’t
many players in college basketball that possess his level of athleticism and strength on the court.
Once Nash learns how to utilize both on the defensive end of the court he will be a tremendous
all-around player.

#8) Dorian Finney-Smith – SF – Virginia Tech
Surprising? Maybe to some, but not to us. Finney–Smith is likely to be the player that coaches
from some of the top programs around the country will look at and wish they had recruited
harder, or better. His versatility, ability to create, toughness and will to win rank up there with any
incoming freshmen. Finney–Smith is a walking match-up nightmare and with Seth Greenberg on
the sidelines. We know that Finney–Smith will only continue to get better.

#9) Myck Kabongo – PG – Texas
Some analysts have the opinion that Kabongo is a bit further down the list of top freshmen point
guards, but we feel that Kabongo will have an immediate impact on the Texas program. Simply
put, Kabongo makes plays happen. He makes the players around him better because he is so
gifted in creating and setting them up for easy baskets. Like most freshman point guards Kabongo
will need to work on not over dribbling, but once the light bulb turns on the ceiling is way up
there for Kabongo.

#10) Quincy Miller – PF/SF – Baylor Bears
The 6’10” Miller will need to add strength to his tremendously long frame, but his length and
skill-set will make him a top 10 incoming freshman in 2011-2012. Miller can stroke the three,
create his own shot off the bounce and get to the rim. If Miller can use his length to rebound
from his position and recover off screens on the defensive end of the floor, he should see his
stock rise.