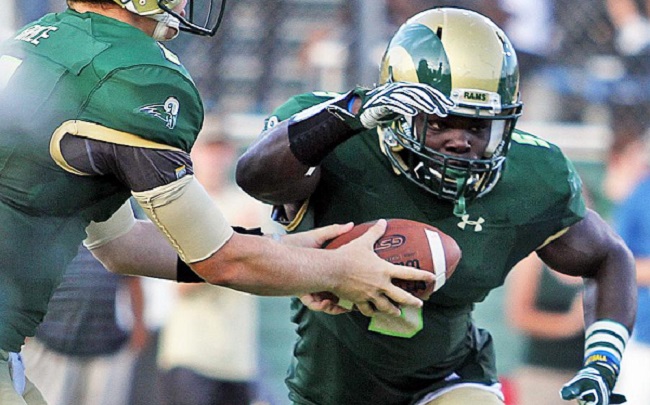 There are only two weekends left in the high school football season. While that makes us sad we are lucky to have a great slate of games this week. Check out our breakdowns of the top 15 games. Don’t like our predictions? Let us know below how you feel about our predictions and follow us on Twitter @PrepForce1 to stay updated on all the action.

#12 Roswell vs #4 Grayson
The Georgia 7A championship is the game of the week. #4 Grayson and #12 Roswell will battle it out at the Georgia Dome. This game will have 20+ FBS players in just the 2017 class alone. Grayson flexed their muscle in an impressive 44-26 win over Mill Creek last week. Mill Creek is a physical team so the Rams could have some fatigue in this game. That being said they are the better team and we expect them to get the win. An impressive win could garner them a top 3 finish.
Roswell 24 – Grayson 34

#9 Allen vs #15 The Woodlands
This may be the best game at Darrell K Royal stadium all year. We are kidding sort of but Austin is getting treated to a great game this weekend. Both teams are undefeated and come into this game on a roll. Allen has played the much tougher schedule that looks even better after Evangel Christian Academy and Hoover won state titles last week. Allen has has a big talent advantage in this game especially on the offensive side of the ball.
Allen 34 – The Woodlands 24

#5 DeSoto vs Klein Collins
Desoto comes into this game off another great win over Cedar Hill. The Eagles have had the toughest road of any playoff team in Texas. It doesn’t get any easier this week against Klein Collins. The Tigers only loss of the year is a double OT loss to Katy back in September. Klein Collins should have a little bit of a home field advantage with this game being played in Houston. That should keep them in the game but Shawn Robinson is playing on another level right now and will lead the Eagles to the finals.
DeSoto 38 – Klein Collins 27

#6 St. Thomas Aquinas vs Plant
Plant comes into the Florida 7A championship undefeated to face 2 loss St. Thomas Aquinas. That might be the most misleading stat of the weekend. St. Thomas is playing lights out right now and showing why they could’ve easily been the #1 team in the country this year. They have been blowing out good teams in the first half of their playoff games this year. While we are calling for a blowout we doubt this one is close in the 4th. If it is close Plant has a chance as St. Thomas has faltered late in both of their losses.
St. Thomas Aquinas 34 – Plant 17

Central Catholic vs #14 St. Joseph’s Prep
The PA 6A championship should be a great game. Central Catholic was ranked preseason but lost their first game to St. John’s and dropped off the radar. St. Joseph’s Prep is undefeated and led by one of the best RB in the country Georgia commit D’Andre Swift. This game will come down to who can get stops. Both offenses are explosive and will score points. We are going to call for the upset and think the PCC defensive line and linebackers led by David Adams shows up enough to get the win.
Central Catholic 41 – St. Joseph’s Prep 35

Freedom at St. Mary’s
This CIF Northern D1-AA semifinal is an interesting game as it has a team that actually lost last week. Freedom was defeated by De La Salle but get a chance to redeem themselves this week. The problem for them is St. Mary’s is even better than De La Salle. Expect the Rams to get the win and move on to meet the winner of the next game.
Freedom 21 – St. Mary’s 34

Narbonne vs Cathedral Catholic
Both teams come in undefeated for this CIF Southern D1-AA semifinal. Cathedral Catholic is just out of our national rankings and could get in with a win this week. This game should come down to the late 4th but the Dons should have a bit of a home field advantage playing in San Diego that should hlep them pull out the win.
Narbonne 21 – Cathedral Catholic 27

Cocoa vs Bolles
The Florida 4A Championship should be the best game in Orlando this weekend. Bolles comes in undefeated but Cocoa has played the much tougher schedule. Cocoa has 1 loss on the year and that was to #1 Bishop Gorman. Cocoa showed what it was made off when they beat a very good Booker T. Washington team last week. We expect the big game experience to pay off and having Bruce Judson ready to show out will get the Tigers the title.
Cocoa 24 – Bolles 21

Harrisburg vs Archbishop Wood
These two teams meet for the PA 5A Championship. Archbishop Wood has 2 losses but those were in their first 2 games of the season to good Bergen Catholic and #14 St. Joseph’s Prep . Harrisburg has been inconsistent and will need their best performance of the year to get this win. We have more faith in the Vikings to get it done.
Harrisburg 20 vs Archbishop Wood 27

Spartanburg at Boiling Springs
This game is a rematch of a great overtime game that was played back on October 21. Boiling Springs won that game 24-21. The Bulldogs used last years big upset win over Spartanburg as a spring board to a great year. Spartanburg will come into this game wanting revenge for the past two games and the regular season win curse has us tempted to pick the Vikings, but we think the Bulldogs move on to take on the winner of the next game for the SC 5A title.
Spartanburg 17 – Boiling Springs 21

Fort Dorchester at Dutch Fork
These two teams met in early September in a game won by Dutch Fork. We know that rematches in the playoffs have been favoring the team that loss the regular season game. The difference is this game will be played at Dutch Fork and not neutral so the Silver Foxes should get the win.
Fort Dorchester 20 – Dutch Fork 30

Edna Karr vs Neville
The top 2 teams in Louisiana will meet for the 4A title at the Superdome. Both teams are undefeated and are used to meeting for the title including last years game won by Neville. Even though Neville is built on the run the injury to Bobby Newtown will hamper their strong running game. Edna Karr should be able to throw the ball around and do enough to get revenge for last year.
Edna Karr 28 – Neville 24

Valdosta vs Tucker
Both teams have 1 loss coming into the GA 6A Championship game. Valdosta lost to Colquitt County while Tucker beat them. We trust the Tucker run game more than the Valdosta passing game. It should be a nail biter but we got the Tigers.
Valdosta 20 vs Tucker 23