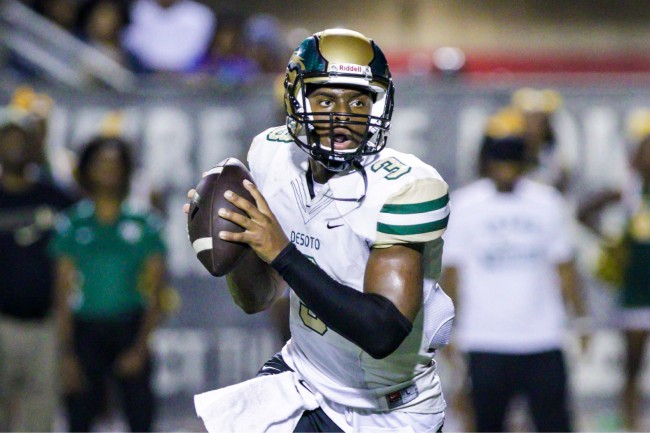 Sadly this is our last full predictions column of the HSFB season. We will have predictions for the Geico Championship games but there are only two of those. Hopefully you liked our predictions enough and will join us next season where we have something special planned. Check out our breakdowns of the all the top state title games of the week. Don’t like our predictions? Let us know below how you feel about our predictions and follow us on Twitter @PrepForce1 to stay updated on all the action.

#10 The Woodlands vs #13 Lake Travis
If you like defensive football you probably should not watch the TX 6A-I title game. This is going to be a game straight out of the Big12 playbook. The Woodlands showed last week that they are great at stopping the run. The problem is Lake Travis doesn’t have to run to beat you. Lake Travis QB and SMU commit Charlie Brewer has thrown for over 3500 yards and 50 TD’s while rarely finishing the game in blowout wins. If Brewer isn’t beating you through the air he is more than capable of getting it done with his feet. The Woodlands counters with Sam Houston State commit QB Eric Schmid. Lake Travis is used to playing for state titles while this would be the first title for the Highlanders. We are definitely torn on this game. If this game turns into an absolute shootout it favors Lake Travis. If The Woodlands can run the ball and make it a semi shootout they should win. We think The Woodlands should be able to control the game more with their defense and get the win.
The Woodlands 41 – Lake Travis 38

#5 DeSoto vs #20 Cibolo Steele
The TX 6A-II game has shootout potential similar to the first game but we expect the Steele defense to prevent that. DeSoto is led by Texas Player Of The Year QB Shawn Robinson. The TCU commit has almost 4500 yards of total offense on the season. Steele is led by Texas Tech QB commit Xavier Martin. Steele is loaded on the defensive side of the ball especially up the middle. The problem for the Knights will be matching up with the DeSoto WR corp which is one of the best in the country. These two teams have met in the regular season the past two years and they split the games with the aggregate score being 62-59. DeSoto will have the revenge factor of last year’s game going for them and there is no way we are picking against Shawn Robinson right now.
DeSoto 34 – Cibolo Steele 30

#8 St. John Bosco vs De La Salle
The CIF Open Divison title game will be a battle of who can run the ball the best. St. John Bosco showed how good it can be when they reign in Re-Al Mitchell in their 42-28 regional win over Mater Dei. The Braves can run behind Wyatt Davis whenever needed and that should be the game plan once again. De La Salle has a formidable running attack of their own with their legendary veer option offense. In De La Salle’s only loss of the year to East (UT) they faced another option team that could run the ball effectively. It will be interesting to see what the Bosco coaches draw up in this one but the less passes for both sides the better. We think Bosco has the better defense and will bring home the title.
St. John Bosco 37 – De La Salle 28

St. Mary’s vs Cathedral Catholic
The CIF Division 1-AA game is a rematch of a 2008 state title game which was won by Cathedral Catholic. The players in this game wont remember this game but the fans of the schools will remember that classic 37-34 thriller. This game should be just as good. Both teams have explosive offenses and good defenses. St. Mary’s has the advantage this time of the game being played in the NorCal region unlike the 2008 game. The Rams had 6 turnovers last week so they should be extra focused this week. The Dons are undefeated but the Rams will be by far the best team they played all year. This game is a toss up but we will go with the Rams getting revenge by the same 37-34 score.
St. Mary’s 37 – Cathedral Catholic 34

Highland Park vs Temple
The Texas 5A-D1 championship game will go down between two teams that were not expected to be here. Highland Park upset Denton Ryan last week while Temple has knocked off undefeated teams (Manvel and Foster) in back to back weeks. Both teams are well balanced on offense and have great defense. This game comes down to the x factors. It is a virtual home game for Highland Park and do you honestly think Jerry Jones is going to let his grandson, Highland park QB John Stephen Jones lose in Jerry World. Add that to the fact that Highland Park alum Matthew Stafford is having an MVP caliber season so it seems its a year of destiny for Highland Park.
Highland Park 31 – Temple 24

Aledo vs Calallen
Aledo has been dominant on both sides of the ball in rolling to an undefeated record. The offense is balance with Dillon Davis throwing for 3700 yards and the Bearcats have run for over 4500 yards. Calallen’s Wing T offense should keep them in the game early but if they get behind and have to start throwing they will be in trouble.
Aledo 38 – Calallen 24

Del Oro vs San Clemente
Del Oro is looking for back to back CA Division 1-A titles and will have a virtual home game at Sacramento State on Saturday. San Clemente finally won a regional title after heartbreak the past 2 years. Both teams have QB’s that can run and pass as well as great run games. San Clemente brings the star power into this game being led by USC commit QB Jack Sears. Del Oro has a great QB of their own in Stone Smartt. Both teams should be able to score so the defense that steps up will get the win. Although there are many people in California that won’t want to see Del Oro because of politics, we think they get the win.
Del Oro 35 – San Clemente 31

Valley Christian vs Madison
Madison in the CA Divison 2-AA title game after one of the best comebacks in the playoffs of any state this year. They beat previously undefeated Calabasas after being down 3 scores in the 4th quarter. Valley Christian has a stout defense that has only given up more than 14 points twice this year. This game should be close late but we like Terrell Carter to make enough big plays to get the title for the Warhawks.
Valley Christian 21 – Madison 24

Wake Forest vs Page
Page has rolled through the NC 4AA playoffs winning by a combined total of 192-68. Wake Forest on the other hand is coming off a hard fart 20-17 OT win over Middle Creek. Wake Forest has had a knack of winning close games this year which is why they are still undefeated. We expect the Page offense led by Maryland commit RB Javon Leake to be too explosive for Wake Forest to keep up with.
Wake Forest 24 – Page 34

Cape Fear vs Dudley
Critics might say the NC 4A championship game was played last week when Dudley beat Charlotte Catholic. Cape Fear wants to hear none of that. The Colts are undefeated and will hope that the Panthers will take them lightly. We can’t see that happen and expect the Dudley Boyz to bring home the crown.
Cape Fear 24 – Dudley 34

South Pointe vs Hartsville
South Pointe is ranked by a number of the other national polls and for good reason. We just can’t get past St. Frances Academy loss. The Stallions should be focused after avoiding the upset in 2 OT last week to South Aiken. Hartsville is taking a big step up in competition this week and will need to play perfect to keep it close.
South Pointe 34 – Hartsville 17