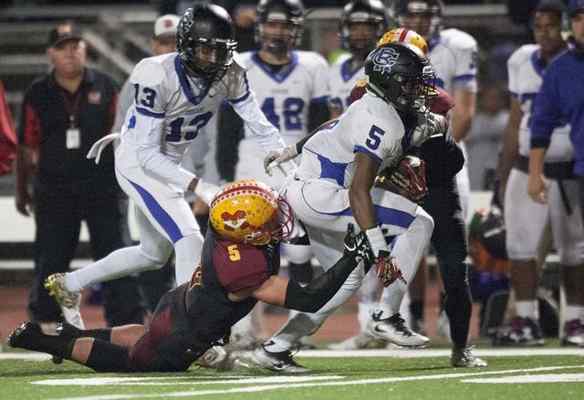 Week 13 was a weekend of upsets, near upsets and the continuing trend of teams that lost the regular season game winning the rematch in the playoffs. Three ranked teams lost this week, two of them in rematches. New #21 Rancho Cucamonga won the only game of ranked teams over previous #21 Mission Viejo. As a reward for the win the Cougars get to face off against #4 Mater Dei. The game of the week was the WCAC finals where #3 overcame a 15 point deficit mid way in the 4th to win their 4th consecutive WCAC title. While they will need a lot of help to win the National Title the Stags are deserving of their lofty rankings thanks in large part to their QB Air Force commit Beau English. Anyone that follows us knows how underrated we think Beau is and what an outstanding high school football player he was.

The new teams in the rankings this week are #23 Norman North, #24 St. Ignatius and #25 Center Grove. Norman North will take on Union who upset previous #22 Jenks in the OKlahoma 6A-I title game. St. Ignatius is now the favorite in the Ohio Divison I playoffs which have been the home to a few big upsets. Center Grove has put together 2 big wins over Warren Central and Ben Davis and will face off against Carmel in the Indiana 6A title game.

Check back later this week for our predictions on those game plus the other top games of the week. Follow us on Twitter @PrepForce1 and like us on Facebook PrepForce to keep up with all the action plus great highlight videos of some of the biggest stars in the nation.