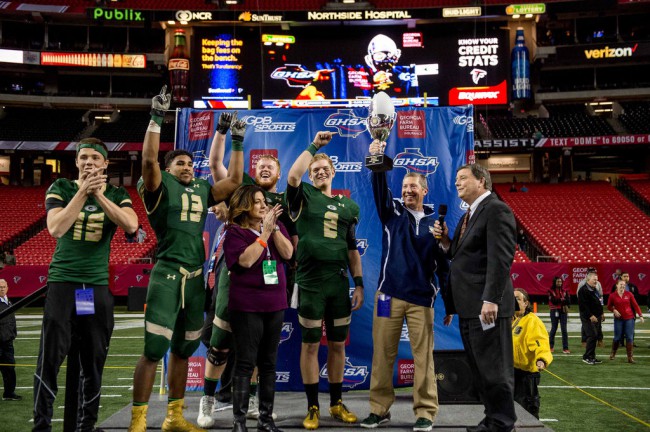 there was a lot of shakeup in the rankings this week but no new teams. The teams that lost in state title or semifinal games had enough of a resume to stay well within the Top 25. The Georgia 7A championship was the GOTW as expected. Grayson pulled out an OT win to stay ranked #4 while Rosell drops a few spots to #16. The Texas semifinals caused some shakeup as new #10 The Woodlands defeated now #15 Allen. We were higher than everyone else all year on The Woodlands but this victory even surprised us a little bit. #13 Lake Travis and #20 Steele also move up after their wins. The most impressive win of the weekend was by new #9 St. Joseph’s Prep. The Hawks beat a very good Central Catholic team 42-7 to win the PA 6A crown. The undefeated hawks jump up to #9 in this week’s rankings.

This weekend is the final real weekend of the season. Only the Geico Champions games will be left. State title games in California and Texas lead the slate. Check back later this week for our predictions on those games. Follow us on Twitter @PrepForce1 and like us on Facebook PrepForce to keep up with all the action plus great highlight videos of some of the biggest stars in the nation.