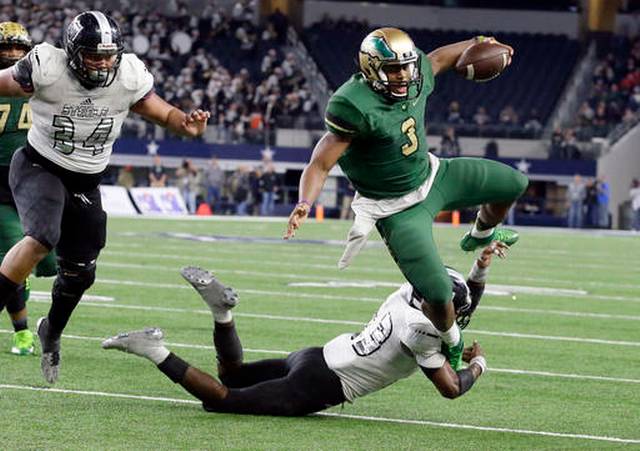 All the state tournaments are done and the high school football season is all but over. Thanksfully the great people at Geico and ESPN give us another 2 games this Friday. The games are #6 St. Thomas Aquinas vs #25 Bingham and #19 Chandler vs Valdosta. These games will have a little bit of effect on the rankings so this isn’t the final poll. Desoto moves up to #3 this week after QB Shawn Robinson put on another show in their win over Steele in the Texas 6A-II championship. The loss drops Steele from the polls. Lake Travis moves up to 11 after the most impressive win of the weekend over now #17 The Woodlands. #7 ST. John Bosco moves up a spot after their big win over De La Salle in the CIF Open Division title game. There are two new teams in the rankings this week #20 Cathedral Catholic and #23 Carol City. The Dons ended an undefeated season by defeating a very good St. Mary’s team in the CIF 1-AA finals. Carol City won the Florida 6A title last week.

Check back later this week for our predictions on the Geico games. Make sure to check out our final poll coming on Saturday. Follow us on Twitter @PrepForce1 and like us on Facebook PrepForce to keep up with all the action plus great highlight videos of some of the biggest stars in the nation.