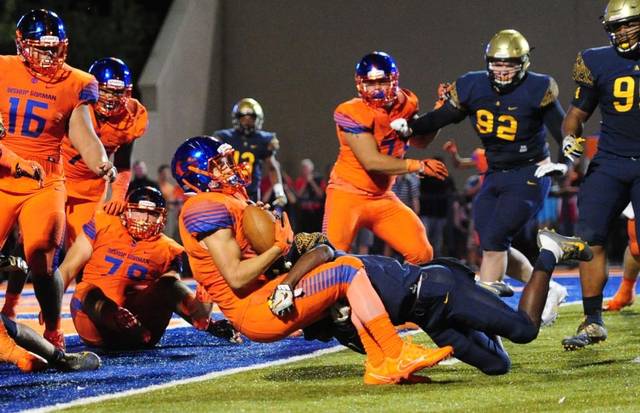 Week 6 is in the books and 4 ranked teams fell over the weekend. Two of those losses came to other ranked teams, one was to a team that is now ranked and one was an upset. The two big games of the week lived up to their billings. Bishop Gorman escaped with a triple OT win after some more questionable late game coaching by St. Thomas. St. Thomas is two late game play calls away from being the #1 team in the country but instead are #11 this week. The other big game was #3 Dematha’s 14-13 win over St. John’s. St. John’s went for 2 after scoring late in the game but was stopped and denied the victory. These two teams will likely meet again in the WCAC playoffs in what should be another classic. The upset of the weekend happened in Miami where we can’t get a clear picture on who’s great from week to week. The dust should be settled in a couple of weeks once Northwestern plays previously ranked Miami Central and Booker T. Washington. Things are also unclear in New Jersey after St. Joseph Regional defeated Bergen Catholic in double overtime. The Green Knights are ranked after the win. Their only loss of the season came to St. John’s. The other new team in the rankings this week is Oxbridge Academy. The Thunderwolves (great mascot) have a put together a few solid wins on the season and will have a bye week to prepare for their showdown with #2 IMG.
Check back later this week for our predictions on the top 10 games of the week. Follow us on Twitter @PrepForce1 and like us on Facebook PrepForce to keep up with all the action plus great highlight videos of some of the biggest stars in the nation.