Everything you need to know about Tim Tebow! 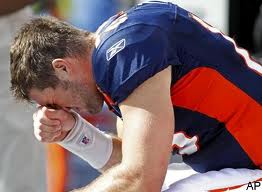 Prep Force is a site dedicated to high school and college sports but the absurdity of the Tim Tebow public suck fest has gotten so out of control that I felt the need to write this article. He is currently the most overrated sports figure of my lifetime and probably ever. There now appears to be two groups on this Tebow bandwagon. One is the group that realizes Tim Tebow is not a very good QB but think its funny that he is winning. The other is the group that has now bought into the fact that Tebow is a good QB. Usually these fans are limited to being fans of the team the QB plays for. Not in this case, Tebow has believers from all over the country, covering all teams. Even more surprising is that I know knowledgeable sports fans and media that have firmly tied their sports knowledge reputation to defending Tebow. One year from now when Tebow is not a starting QB in the NFL it will be the duty of everyone who knows one of these Tebow supporters to never let them live this moment down. If you are sitting in a bar one year from now and you have a buddy who was a Tebow supporter and you guys are debating sports you have an automatic trump card. All you will ever have to say, no matter what the argument is about, is TEBOW! Any real sports fan that cannot see what is going on here doesn’t deserve to win a sports argument ever again. I will use the rest of the article to show real stats as to why Tebow is so overrated that you can feel free to use when anyone starts talking Tebow this week. For the sake of this article I, like every other Tebow supporter, will pretend that the Detroit game didn’t really happen.

2. Tim Tebow before this week has a QBR rating of 25.3 and I don’t think it got any better last night. For those that don’t follow QBR is the new metric for measuring the true efficiency of a QB. That metric includes his running stats which is the only above average skill he has. He rates second to last in QBR only beating out the aforementioned Blaine Gabbert.

3. Lets take a look at last nights game. Denver started 5 drives in NY Jets territory last night. If you look at the expected points chart just for those 5 drives alone he should have scored roughly 12 points. The offense did not score 10 total points in the whole game and that doesn’t include the 7 other drives in the game. That means that if Tebow would have just done what an average QB would’ve done on those 5 drives along he wouldn’t have needed the end of game drive. What most people are failing to realize is that if Denver had an average QB these games would not be close at the end.

4. In the 2 4th quarter comeback wins he managed to accumulate 43% of the total yards for those games in the drives when the opposing defense went into prevent. Those yards came in 3 out of 27 total drives. In the non prevent drives in those games he averaged 12.6 yards per drive, The average yards per drive in the NFL is roughly 30. He is about 18 yards per drive worse than average.

5. Time to take a look at the teams that Tebow has beat during these 4 games (Miami, Oakland, Kansas City, and New York Jets). These 4 teams are a combined 16-21. The records of the 5 opponents in games that Kyle Orton is 29-16. So how many of those games would Tebow have won?

* On a side note we need to look at the AFC West out of division wins. Jets twice, Houston, Cleveland, Minnesota twice, Cincinnati, Miami twice. There are two wins over above .500 teams one was Oakland over Houston in the game when Andre Johnson went down. The other was the Kyle Orton led Broncos over Cincinnati. The division is very bad to say the least.

All these stats show that if Tebow was even an average QB these games would be blowouts. Lets also not forget that Tebow needed a pick 6 and a recovered onside kick for two of the wins.

What Tebow Does Well

1. Tebow throws such bad passes that they cannot be intercepted and that is a good thing. He either throws balls in the dirt or overthrows the receiver so badly that no one can catch it. This is in fact a good thing.

2. Tebow is really good at late game drives. As pointed above these drives occur when the other team is in the prevent defense, but regardless he does get the job done. I think this has to do with his ability to run and the fact that when a team is in the prevent defense he has the ability to run and get enough yards to produce first downs and keep the drives going. It has been suggested that Tebow should be used in a closer roll for the Broncos. Let Brady Quinn play the first 55 minutes and if the Broncos are losing (which they probably wont be) then bring in Tebow for the last drive. I think this is something they should really consider.

I guess this proves that Tebow has really good timing. Maybe he in fact is keeping these games close just to build his legend. If he comes out and admits this I will have so much more respect for him.

Why The Broncos Are Really Winning – The Defense

1. It has been said by knowledgeable football fans that the best player on the field last night was Von Miller. He is the guy that people should be talking about when talking about the Broncos. The guy is a rookie who has stepped in and is the QB of the defense and should probably be considered Rookie of the Year if he wasn’t being so overshadowed by Tebow. The guy is on pace to set the rookie record for sacks. If Miller doesn’t deflect the pass on the slant pattern from Sanchez to Holmes last night then Tebow doesn’t have a chance to work his “magic”.

3. I also think many people fail to realize that Denver was missing two of their best defensive players (Champ Bailey and Elvis Dumervil) for 2 of the 5 games Kyle Orton started. Those two have played every game that Tebow has start and now with the defense healthy the defense is playing well. That also has to do with the level of competition of the opposing offenses.

I think these stats prove that any QB would have won the 4 games because of the way the defense has played.

Now lets have some fun with this. I have come up with this conspiracy theory that thinks that these other bad NFL teams are playing a practical joke on the Broncos. I came up with this last week before last nights win so I thought there was a conspiracy going on between the other AFC west teams to lose to Tebow so that the Broncos have no choice but to keep him as their QB. Think about it, as long as Tebow is the QB of the Broncos they will be an average team that will be stuck in the middle of the pack with no chance of ever being great. I can see the other AFC West GM’s on a conference call just laughing at this cruel joke they are playing on John Elway. As many of you probably know John Elway is not a Tebow fan because he knows he is not a competent QB but he is stuck with him as long as he keeps winning. If this ever comes out as being the case it will go down as the greatest practical joke EVER!

I hope this article has shed some light on the fraud which is Tim Tebow. For the people that understand this I hope this article gives you some more ammo in your Tebow debates. I realize that no Tebow fans will make it to this point of the article as they just want to live in the Tebow fantasy world, but I would love to hear you debunk these stats. Feel free to leave your hatred in the comments.

Editors Note – Prep Force is a social media site geared to high school recruiting and college sports. Please join the site and start following your favorite schools athletes to keep up to date on all recruit info directly from the mouths of the recruits themselves.