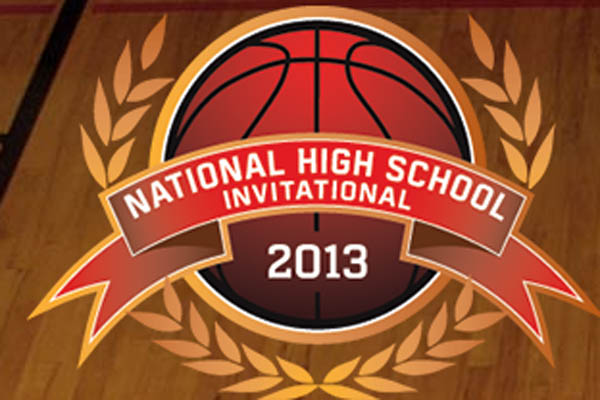 The 2013 National High School Invitational starts tomorrow at Georgetown Prep in Bethesda Maryland. All of the games will be covered by ESPN and here is a link to the bracket. The field has 7 of the top Prep Schools in the nation and the best public school team from Florida. The prep schools don’t get to play in the traditional state tournaments so this is their way to finish of their season with a title. The winner of this tournament will also be considered the best team in the nation for 2013. Here is of our preview of how we think the tournament will shake out.

First Round
Prime Prep vs Blanche Ely
Prime Prep features 4 players that have committed to D1 colleges, Jordan Mickey (LSU), Karviar Shepherd (TCU), Shirmane Thomas (Tennessee Tech) and Damon Collins (Howard). That of course doesn’t include the best 2014 PG in the country, Emmanuel Mudiay, who will go wherever he wants and top 10 2015 big man Elijah Thomas. The team has a solid bench full of future D1 players as well. Ely has two committed D1 players as well with Dallas Cameron headed to American and Kahlil Thomas headed to Rider. What they lack in star power they make up for in solid team basketball.

Prediction:
Prime Prep is coming off their first loss of the season to Sunrise Christian Academy just a few days ago. I think this will have them focused for this tournament. Even though they lost they do have the advantage of playing in the last week while Ely hasn’t played in over a month. I expect Prime Prep’s superior talent to overcome in this one.
Prime Prep wins.

Montverde Academy vs Oak Hill Academy
These teams have been two of the most successful teams in recent history. They are also the last two runner ups in this tournament Montverde Academy (2012) Oak Hill (2011). Montverde is led by the inside/outside duo of Kasey Hill (Florida) and Dakari Johnson (Kentucky). They also have one of the best rebounders in the country Devin Williams (West Virgina) and a top 25 2014 player D’Angelo Russell. Oak Hill has had an up and down season thanks in large part to the mid season injury to Nate Britt (North Carolina). They have 4 other players currently committed to D1 schools Troy Williams (Indiana), Sindarius Thornwell (South Carolina), R.J. Curington (Depaul) and Ikenna Iroegbu (Washington State).

Prediction:
I’m looking forward to seeing the Kasey Hill-Nate Britt matchup. Nate Britt is a fierce competitor so I expect him to play well in this game. I just think the front line of Montverde will be way too big and physical for Oak Hill. If Montverde does miss I expect Johnson and Williams to be able to grab plenty of boards and that should be the difference.
Montverde Academy wins.

St. Benedict’s Prep vs La Lumiere
St Benedict’s is led by star PG Tyler Ennis (Syracuse). They have a trio of D1 forwards in Mike Young (Pittsburgh), Isaiah Watkins (Duquesne) and Denzell Taylor (Old Dominion). They have been ranked in the top 5 all year and only have one loss which came in a look ahead game that they later avenged with a 47 point victory. La Lumiere is led by their great back court of Detrick Mostella (Oklahoma State) and Jalen James (recently picked up Alabama and Arkansas offers). They also have big men Torren Jones (Missouri) and 2014 4 star Sam Logwood. La Lumiere has struggled at the end of the season losing 3 of their last 5 games.

Prediction:
This is another game where the guard play will be even but St. Benedict’s should be able to control the paint. If Mostella gets hot from downtown he could keep it close but I see St. Bendict’s having the edge in this one.
St. Benedict’s wins.

Findlay Prep vs Montrose Christian
I think the schedule makers made this game more so the TV announcers would have something to talk about rather than based on seedings. These are the past two winners of this tournament, Findlay last year and Montverde in 2011. Findlay is the only team that is still undefeated in this tournament and is currently ranked #1 in the nation. Like every other year everyone on their roster is headed to a D1 school, Nigel Williams-Goss (Washington), Stanford Robinson (Indiana), Allerik Freeman (UCLA), Christian Wood (UNLV), Gavin Schilling (Michigan State), Dion Wade (Auburn) Benas Griciunas (Auburn), Fallou Ndoye (Mississippi State). Williams-Goss is one of the most underrated players in the country and is a pure winner. If you don’t believe just go back and watch his last two games vs Montverde. Montrose Christian is led by small forwards Ishmail Wainright (Baylor) and Jordan Swopshire (Bradley). They are coached by legend Stu Vetter who always has his team ready.

Prediction:
These two team played earlier in the season with Findlay winning 40-35. I expect Stu Vetter to try and slow the game down again knowing that he doesn’t have the firepower to hang with Findlay. This game will probably end in a similar result to the first meeting.
Findlay Prep wins.

Second Round
The final four of this tournament will be the best 4 teams in the country this year. These two matchups could be special and could really go either way.

Prime Prep vs Montverde Academy
There are two matchups that will be key to this game. The point guards in this game are the two best point guards playing high school basketball right now (sorry Andrew Harrison). The center matchup will be a great one between Johnson and Shephard. Neither player has had to play against many 6’10 players this year so it will be interesting to see how they respond.

Prediction:
As I mentioned earlier I think Prime Prep will be fired up coming off their loss last week. I also think that they have been flying under the radar from most people (not here at Prep Force) for most of the season. They have not had the chance to showcase their skills on the national TV stage. Montverde should have an advantage on the boards in this one so Prime Prep will have to play tough and have Elijah Thomas play some good minutes. This is a very even matchup but I feel Emmanuel Mudiay will be the best player on the floor and that will be the difference in this game.
Prime Prep wins.

Championship
This is the meeting I’ve been waiting for all year. There has been some Twitter trash talk throughout the year from fans of the two schools. Prep Force was the first national site to rank Prime Prep #2 mid way through the year. Eventually the other sites caught up and most of them shot them up the rankings. There has been an ongoing debate as to who the best team really is. With last week’s loss by Prime Prep its safe to say that Findlay deserves to be ranked #1 right now. That will all change if they lose to Prime Prep or Montverde in the finals of this tournament.

Findlay Prep vs Prime Prep
This is a matchup of the perennial high school power versus Deion Sanders first year basketball team. Prime Prep can matchup talent wise with Findlay across the board which most teams can’t say. The make up of both teams is similar with both having great back courts, athletic wings and athletic centers down low who aren’t the most physical but are very talented. They both also have so big physical players to bring off the bench when needed. Findlay Prep is the deeper team but I don’t see Prime Prep wearing down as they have enough good talent to stay fresh. I have been going back and forth all year wondering who would win if these teams finally played. I am glad we get a chance to see it unfold on the court and don’t have to worry about hypotheticals. My ultimate faith in Emmanuel Mudiay has me picking the upset in this game. I know that picking against Nigel Williams-Goss is a good way to always be wrong but let’s hope this once I am right.
Prime Prep wins the National High School Inviational.

As a caveat if Montverde does beat Prime Prep I can’t see them blowing a third game to Findlay so I think they will pull out the championship. I fully expect tons of Findlay hate mail for both of these predictions.

Don’t agree with the predictions? Think you know who is going to win? Let us know about them in the comments section below!
Fans JOIN NOW to keep track of your favorite players and their latest updates
Follow Us on Twitter @PrepForce1
Become a fan on Facebook HERE
To check out more Video of some of the best HS basketball athletes in the country click HERE

Myles Turner – The Rise Of A Star