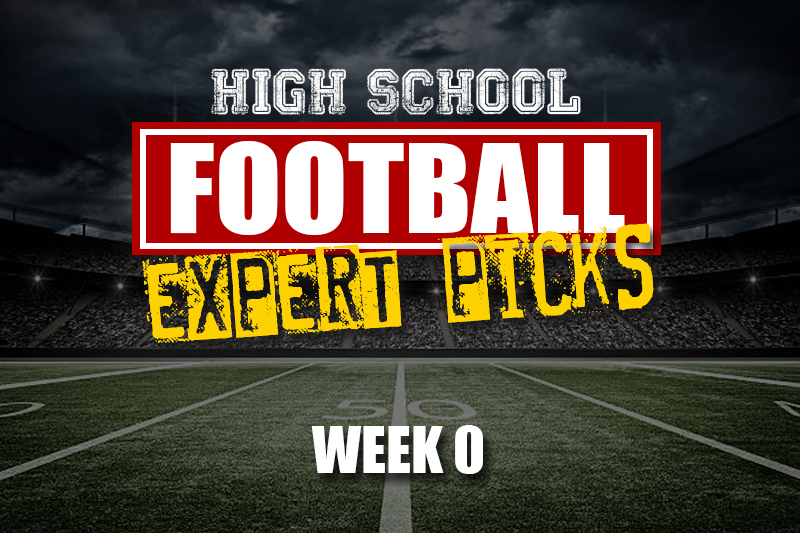 Thankfully the new high school football season is finally here. That means we are back with another season of the Expert Pick’Em Contest. PrepGridiron won a closely contested contest last year. Seven of the eight experts are back from last year. In case you have never followed the contest before the expert are us the home team PrepForce, Zack Poff from MaxPreps, Jeff Fisher from HSFBAmerica, Josh Wilson from FloridaHsFootball, Brian Dohn from 247Sports, Jamie DeMoney from PrepNation and at last check a team of 5 experts from PrepGridiron. These guys live and breathe HSFB so this should give good insight into the top games of the week. Since Woody from Rivals dropped out there will be a new 8th contestant this year and that will be our consensus picks. If you have followed us before you know like on College Gameday if every expert picks you it could be a curse. For those that didn’t check out last years contest the rules are simple. We pick the winners of the top 10 HSFB games from around the country each week.

This week’s slate of games is stacked thanks to a number of out of state games. A few of these games are part of ESPN kickoff weekend so be sure to check them out. If the ratings are good for these games it is more likely we keep seeing these big time matchups. The top 4 games this week feature a matchup of Top 25 teams. Three of the biggest go down in California where Dematha travels to take on St. John Bosco. Both teams are Top 10 in most of the national preseason polls and St. John Bosco is #1 in a couple include our Preseason Top 25. The experts all agree the home team will win this one. Right down the street two California powers will face off in a private vs public battle when Mater Dei hosts Centennial. The experts all have the Monarchs in this one. Up in Northern California De La Salle will host Florida powerhouse St. Thomas Aquinas. Six of the seven experts are taking the Raiders with the lone pick for De La Salle being the defending champions. There are betting odds on this one and the Spartans are roughly a touchdown favorite so it will be interesting to see how this one plays out.

There are 2 huge games down in Miami as well this week. St. Frances Academy and Miami Central square off in a battle of in an out of state battle that could have national title implications. The Panthers come in the Top5 in most preseason polls, while the Rockets are around Top 10 in most. The experts have the Panthers pulling this one out. Down the road Carol City and Deerfield Beach will face off in a classic Broward vs Dade County showdown. Last year Dade got the best of most of these big matchups, but the experts are slightly backing the team from Broward in this one.

There is also a battle of the Carolinas this week when Mallard creek travels to play Dutch Fork. It would be no surprise if these two teams end up the champions in their respective states this year. The experts are siding with the home team in this one. There is one other out of state battle and that one is between Chandler from Arizona and Liberty from Nevada. Rounding out the schedule are some intriguing in state games. Hoover and Central (Phenix City) will square off to see who is the early season best team in Alabama. In Georgia Colquitt County will be looking for revenge for the classic 2017 state title game, while also starting off a new coaching era after legendary Rush Propst was let go over the summer. Finally there is a battle in Lake City, Florida between a couple of teams with state title hopes between Columbia and Trinity Christian.

Hopefully you have get some enjoyment out of the contest. If you are so inclined there is a site (5Dimes) where you can bet some of these games. Now that sports betting is becoming more mainstream we don’t mind putting that out there. Don’t agree with our picks? Let us know about them on Twitter or in the comments below. Make sure to go follow all the experts for all your high school football and recruiting news. Follow us @PrepForce1 to keep track of the picks and to vote on each of the games to see if you can do better than we do. Also please follow us on Facebook @PrepForceOfficial and subscribe to our Prep Force YouTube channel to watch our world famous highlights.