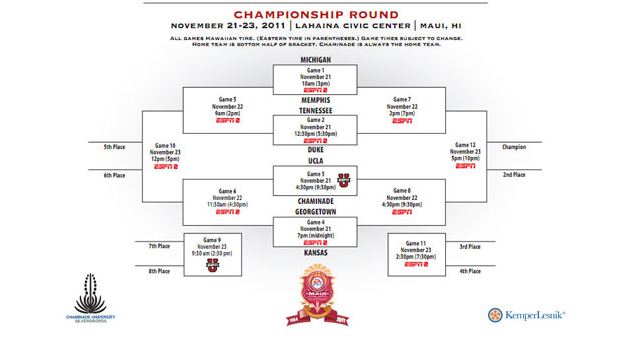 The Maui Invitational is far and away the best “preseason” tournament in college basketball this year. With 4 top 20 teams and a probable 6 tournament teams its a stacked field. The top half of the bracket could be a tournament super regional bracket with the lineup of teams it has. Here is how I see the tournament playing out.

Memphis over Michigan – Memphis looked very impressive out of the gates in a convincing win over a tough Belmont team. Michigan on the other hand Michigan struggled mightily to knock off Western Illinois their last time out. That being said, I expect Michigan to turn this into a sloppy game to try and slow Memphis down. In the end Wesley Witherspoon is the difference between these two closely matched teams.

Duke over Tennessee – While I expect a low scoring game in the first one, this one should be an up and down high scoring affair. In its two games vs real competition this year Duke has played 1 good half and 1 not so good half of basketball. I could see this game being the same with Duke making one big enough run to pull this one out.

UCLA over Chaminade – After watching UCLA play Middle Tennessee State I am not sure they can beat any NCAA division 1 team. Luckily for them they dont have to play one in the first game. These are the two worst teams in the tournament by far so it could be ugly. Maybe Chaminade knew, like I did, that UCLA was overrated and figured this would be their best chance to get a win in this tournament.

Kansas over Gerogetown – I think this will be the best game of the first round. I believe Georgetown is a bit underrated this year and this will be the game that shows it. The key to the game will be in Georgetown can contain the front line of Rosbinson and Withey for Kansas. If they can somehow get one of the two into foul trouble this turns into anyones game. Georgetown has the advantage of the benches and could press Kansas in an attempt to wear them out. While I see Kansas pulling out a very close game, it wouldnt shock me if Georgetown won.

This is how I see the whole tournament playing out but I wont get in depth in case the matchups change.