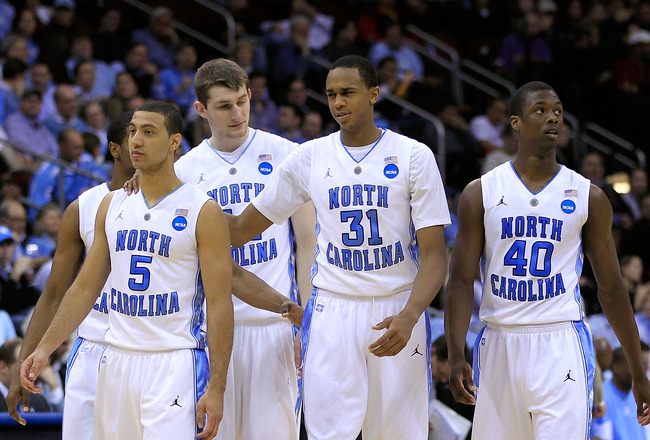 Thankfully another college basketball season is finally here. This should be a very interesting year as it appears the top 4 teams in the country are loaded. Some early 2012 mock drafts have as many as 14 players from those 4 schools in the first round. After ranking the top 10 teams there seemed to be about 30 teams that seemed interchangeable. Instead of ripping out hairs and since trying to totally predict how good a team is going to be before ever having watched them play together is almost pointless, I decided to just list some teams that seemed overrated and underrated in the official preseason pools.

1) UNC – Roy Williams and the Tar Heels know the pressure is on them this season, and they will be the team everyone is gunning for out of the gates. We think this group of Heels is more team oriented than Kentucky, which is why they will be the one team left standing at the end of the season.

2) Kentucky – Basketball is played with only 1 ball and the Wildcats have a lot of players that want the ball. Will they be able to come together to play as a team? Will the superstar freshmen get frustrated or hit the wall? Those questions remain unanswered, but cream usually rises to the top. John Calipari has been to the Final Four and even the title game before, only to crumble during crunch time against fellow superstar coaches.

3) UCONN – Gets the nod over Ohio St as I would rather have Drummond and Oriakhi than Sullinger and Thomas, but an argument can certainly be made either way. Sullinger looked unstoppable at a few summer events, but Drummond is an NBA player that just happens to be in college. The experience of the title run last year should pay huge dividends and we expect the Huskies to once again make a run at the title.

4) Ohio St – Will be the class in the fairly weak Big 10. Their out of confernce games against Florida, Duke and Kansas will show us if the Buckeyes are Final Four worthy or not. On paper it appears the Buckees should have little trouble ringing up another conference title.

6) Vanderbilt – Should bounce back from first round loss in the tournament. Hopefully for them Jeffery Taylor finally puts together a complete season. The suspension of Ezeli for the first 6 games wont help but they should be alright for the meat of the schedule.

7) Baylor – If Scott Drew doesn’t outcoach himself, or get outcoached by the big dogs of the Big 12, this team has all the pieces in place thanks in part to JUCO transfer Pierre Jackson. He could be the point guard this team has been missing with Lacedarius Dunn finally gone. Perry Jones needs to play the role of a future #1 overall pic, and with the additions Quincy Miller and Deuce Bello and the Bears have talent and skill all over the court.

8 ) Duke – I am not as high on Austin Rivers as most so not sure this team is as good as others think. I guess he will have to prove me wrong, but in that system it won’t be shocking to see a guard that can shoot, pass and take dives for charge calls thrive. Duke is good this year and is better in the post than they have been in some time, but there is just something I’m not buying about the Devils.

9) Memphis – The Tigers return 10 letter-winners from last season and add consensus top 10 recruit Adonis Thomas, 6-foot-10 junior college standout center Stan Simpson, and Seton Hall transfer Ferrakohn Hall. With a year of experience under their belt, Memphis’ sophomore core of guards – including Joe Jackson, Will Barton, Chris Crawford, and Antonio Barton – make up one of the best backcourts in the country while senior leader Wesley Witherspoon, Tarik Black, Stan Simpson, Ferrakohn Hall, and Hippolyte Tsafack give the Tigers depth and skill in the post. The Tigers have the depth and potential to reach the Sweet 16 or beyond this year, but everyone is still waiting to see if they’ve gained enough experience to make that first deep run into the NCAA for young head coach Josh Pastner.

10) Kansas – The Jayhawks lost most of their offensive production from last years Elite 8 team, but that comes with the territory of being an elite basketball program. The Jayhawks will look to junior Thomas Robinson to be the man for the Jayhawks this season. Robinson, who put on dominant performances throughout the summer, does have some help. Senior Tyshawn Taylor and junior Elijah Johnson will be key if the Jayhawks are to win the Big 12 for the 8th straight season.

Pitt – Ashton Gibbs is a star but other than him this roster looks devoid of enough high level talent to warrant the preseason hype. Seems like another Pitt team that could have a good regular season follwoed by a short tournament run.

Louisville – Ill need to see if Buckles and Swoopshire are fully back from injury before ill put much faith in this team. If they arent the frontcourt will make them an early out in March

UCLA – Tyler Honeycutt and Malcolm Lee shoudl be kicking themselves pretty hard right now. I think with them this team couldve made a deep run. If this team was not in the Pac whatever they would miss the tournament, unless the Wear twins got significanlty better since leaving UNC. Not to worry UCLA next year is your year.

Underrated teams that could go deep in March

Mississippi State – There are at least 3 legitimate NBA talents on this team and that usually translates into a good run in March. Dee Bost will control the backcourt and the frontcourt is one of the best in the country. Of course the team could all quit in the middle of the season so who knows.

Florida State – I think this is the year the offense finally takes a step forward and scores enough to be a great team. Ian Miller will have a breakout year and Michael Saer will finally put it all together. The front court got plenty of experience with Singleton out last year and will be formidable as a result.

Michigan State – This team could be another one of those Izzo led teams that peaks in March and makes a deep run. You know the coaching will be there. Brandon Wood is a solid transfer who should step in a fill the void at the point. If Appling and Green perform up to their ability this is a good team.

Deep sleepers that could surprise

Georgetown – This team will has a good mix of experience and young talent. They made headlines in the offseason for the wrong reasons but that trip could really spark this team. That extra playing time can only help an underated solid group of freshman. If Henry Sims finally figures it out this team could really surprise in the Big East.

Miami – The backcourt of Grant and Scott are solid and could be future NBA players. The frontcourt only has one solid player but Reggie Johnson is better than most people realize and has the size to be an interesting prospect if he makes strides this season. There is no reason this shouldnt be a tournament team come March.

Let me know what you think!

One thought on “Preseason Basketball Top 10”